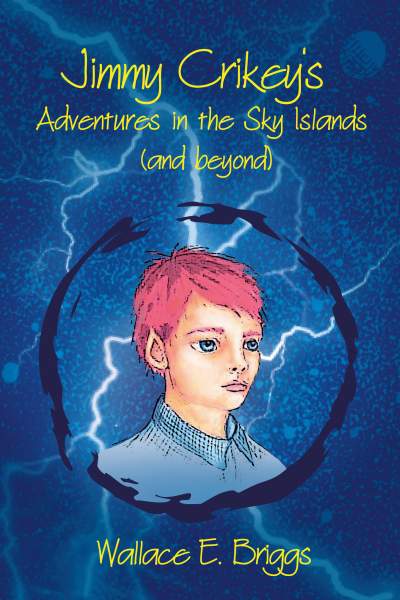 Second in series: Jimmy Crikey is the orphan alien who chose to live on Earth.
Once bullied beyond endurance Jimmy developed his abilities to protect his new Roombelow home from the dangers that threatened.
Far above Earth, the Sky Islands are invaded by the galactic race of Zyrons.
It needs Earth’s four witches, Lord Oron the ancient Weatherman and the developing magic of the tiny apprentice witch, Jade, to overcome the invaders, with a little help from Jimmy Crikey and XRU.
The Zyrons are repelled but in the process the Weatherman disappears.
The four witches unite to search for him throughout the Solar System in Jimmy’s starship.
Their search takes them to the hidden caverns of Mars where stick-like beings called Ropians live below the surface of the barren planet.
The Ropians become an interplanetary threat when their need for water threatens Earth. They have entrapped the Weatherman, to help bring them rain.
The supernatural forces of the four witches, the wisdom of the Weatherman, the knowledge of Jimmy and XRU, the talkative portable computer and starship navigator, combine to challenge the threat the Ropians pose.
Will victory assure freedom for the Weatherman?

Reviewed By Emily-Jane Hills Orford for Readers’ Favorite (Awarded 5*)
“Never underestimate the power of the guardians of Earth,” says Ira, one of the four protector witches of Earth. The galactic race of Zyrons has invaded the Sky Islands above Earth and the Ropians, who live in caverns beneath Mars’s surface, threaten to invade Earth to confiscate its water. In order to avert this invasion, Jimmy Crikey, an orphan alien who chose Earth as his home, his team of witches, an ancient weatherman, and a tiny apprentice witch named Jade come up with a viable solution. From threatening invasive alien forces to ingenious solutions using collective brainpower, the interplanetary adventures of one orphan alien, Jimmy Crikey, an outcast, once bullied by his peers, can overcome evil; not through bullying, but through brainpower and courage.

Wallace E. Briggs’ middle-grade novel, Jimmy Crikey’s Adventures in the Sky Islands (and beyond), is a clever, sensitive fantasy/science fiction story that combines the allure of some of the best-known books in this genre. One senses a bit of Harry Potter, Alice in Wonderland and the fairy tales of our youth where the underdog, the scapegoat, always rises above everyone else in the end. The main protagonist, Jimmy Crikey, is the type of character that will attract young readers and they will be cheering him on through one courageously fought battle after another. There is lots of action and mayhem to keep the plot moving forward and the true magic of this story is the magic found deep within us all. The story is full of relevant messages about bullying and how one can overcome and rise above the conflict through courage and self-confidence. It also speaks strongly about the true source of beauty – deep within our souls. A great read for a young audience.

What Inspired You to Write Your Book?
To continue the adventures and successes of a boy who overcame bullying and learned to shine. Jimmy proves it doesn't matter what you look like with grit and determination most obstacles can be overcome.
The heart of the Jimmy Crikey Story

Mirror, mirror on the wall
It doesn’t matter if you’re short or tall,
If your legs are skinny or your waist is wide,
It only matters what’s inside.
Blue eyes, brown eyes black or green
What make you beautiful cannot be seen.
When I look at you I don’t judge your parts.
The best thing about you is in your hearts.
Unattributed,
What makes a person beautiful, is what shines out from inside.

Author Bio:
Now retired from a technical sales and marketing environment selling toxic gas anaylsers I found the time, between caring for my disabled wife of fifty seven years, to write a few more stories. Primarily, I chose to write stories for children. Why?
When I was a youngster, I was brought up in a cash strapped, loving family environment, but books were in short supply.
Minds, including those of my siblings, were not broadened by international travel, nor indeed by local travel, to visit new horizons. Television programmes to show a glimpse of the wonders of the world hardly existed.
I yearned to be transported into a world where cash was not a limiting factor.
Escapism? Yes, but also a release of pent-up emotions, being able to enjoy the fruits of life on equal terms as other children.
So, when I began to write it was to satisfy a desire to entertain children in alternative worlds.
Stories that would transport a child's mind into another world where the presence of physical limitations did not limit the flights of imagination.
When imagination roams free wonderful worlds can come into existence and boundaries to vision are destroyed.
Give young minds the freedom to soar then there are no limits to what an active mind can achieve.