You are here: Home / Buyer's Guides / Grace by Contract by Rachel Rossano 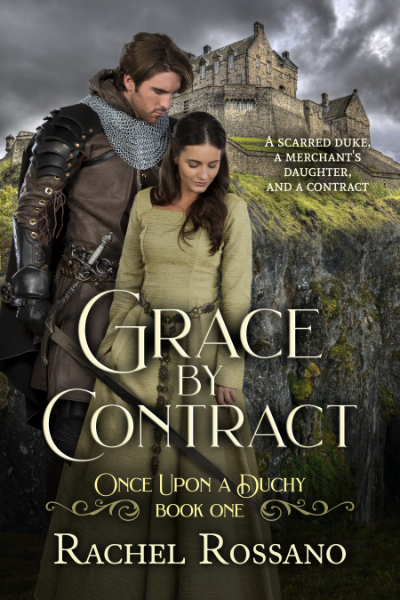 Grace by Contract by Rachel Rossano

After her father uproots the family to the northern duchy of Brackenhurst, Grace Eldon and her four younger sisters struggle with a new life of hardship. Desperate to keep a roof over their heads amid mounting debts, she and her youngest sister seek employment in the Duke of Brackenhurst’s household despite fearsome rumors.

Scarred and maimed from a terrible fire Silas Isling, Duke of Brackenhurst, buries himself in his work to avoid the stares of pity and fear. When one of the new maids shows no fear at his appearance, he is intrigued. That is until his meddling steward gives her the task of cleaning Silas’ bookroom. It is a most unwelcome disruption since he prefers to be alone.

While a thief plagues his castle, an old nemesis reappears, and enemies invade in the guise of guests. Amidst the distractions and chaos, Grace brings some unexpected order. Once convinced his scars had stolen all hope for love, Silas finds his life forever changed by the quiet maid. Could she love a scarred Duke?

A reimagining of Beauty and the Beast

What Inspired You to Write Your Book?
Beauty and the Beast has been a favorite fairy tale of mine for years. So what better place to start a new fairytale-inspired series than with my favorite. I wanted to get down to the heart of the tale, seeing past the exterior and loving the person.

How Did You Come up With Your Characters?
Silas is a scarred man, but he isn't bitter about his exterior. Rather he has learned to live and thrive within his limitations. However, he hasn't completely healed within.
Grace is the eldest of five, a doer, a caretaker, and a hard worker. Her practicality and love for her family drive her actions.