You are here: Home / Free and Bargain Books / Bargain Books Under $3 / Amelia, the Moochins and the Sapphire Palace by Evonne Blanchard 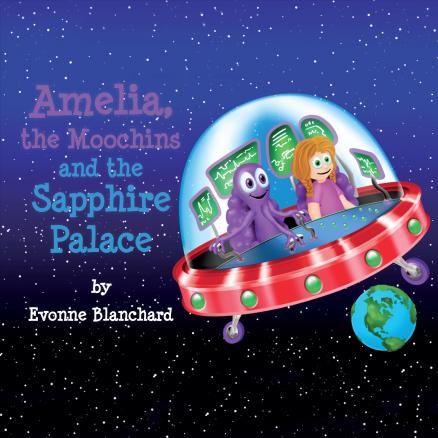 Amelia opens a very strange present, that turns out not to be a present. No, it’s a funny alien from Pluto, called Uglesnoo. His sister is very ill and he desperately needs help. Should Amelia go with him into outer space? A rollercoaster of an adventure follows, filled with aliens, space travel, and the unraveling of the mystery of the Sapphire Palace!

What Inspired You to Write Your Book?
One chilly winter's day I showed my daughter a map of the solar system, in an attempt to entertain her.  Her eyes glazed over as I showed her pictures of Mars and Venus, then she yawned and asked, “Where's the doggy?”

Now, how could I make space interesting, entertaining even? Hmmm. Think, think…An alien visiting from Pluto. Uglesnoo, a fun name for him. Amelia after Amelia Earhart, the famous aviatrix. Plus, it’s a lovely name. Now what would Uglesnoo be doing on Earth? A quest, yes he was here on a quest to save his sister! And this quest will take him and Amelia to the Moon, Sun and all the planets in the Solar System where  they would meet lots of crazy aliens and enjoy many fantastic adventures!

So began the story of, Amelia, the Moochins and the Sapphire Palace, the first book in Amelia’s Amazing Space Adventures, a series of ten for children ages 6-10.

Author Bio:
Evonne Blanchard was born and raised in England. She met her husband, an American, whilst they were both volunteering at a children's orphanage in Guatemala. The writer now lives in Manchester-by-the-Sea, Massachusetts with her husband and their two daughters.

The author has been fascinated by space ever since she was a little girl, mesmerized by clips of Neil Armstrong and Buzz Aldrin walking on the moon. As a teenager, War of the Worlds, by H.G Wells became one of her favorite books and she adores the movie Mars Attacks.

When it came to creating her own aliens, the author decided on the warm and fuzzy type, rather than the war-like Martians. Uglesnoo, her main alien character is from Pluto. He's very friendly and nice but a little crazy too!

Amelia's Amazing Space Adventures begins with the first book, Amelia, the Moochins and the Sapphire Palace, in which Amelia receives a present. A present that’s not a present. No, it’s an alien called Uglesnoo! He has to leave for the moon right away. But his sister Noolong is sick and he needs Amelia’s help! Should Amelia travel with him into outer space?

In book two, Amelia, the Venutons and the Golden cage, Uglesnoo and Amelia blast off for the planet Venus. They need more items to buy the crystal, the only thing that can save Noolong. But Venus is full of danger and angry aliens. Are Uglesnoo and Amelia in over their heads?

Amelia and Uglesnoo travel to the planet Mercury in book three, Amelia, the Merballs and the Emerald Cannon. All goes well until an asteroid hits Mercury. Amelia and Uglesnoo find themselves in deep trouble. How will they convince the Merballs of their innocence? And how will they manage to collect the flying shoes, escape Mercury and continue their quest to save Uglesnoo’s sister?

The author is currently working on the fourth book in the series, Amelia, the Snapperjacks and the Molten Maze.