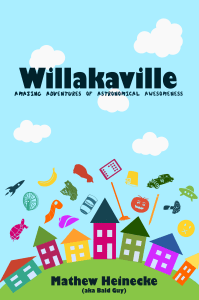 Why is all the toilet paper disappearing?
Will Kyle escape the banana warriors?
Can Marty save everyone from the mushroom zombies?

Find the answers inside Willakaville: Amazing Adventures of Astronomical Awesomeness. Follow intelligent children as they solve supernatural issues and find out about themselves along the way.

If you are into action, adventure and awesomeness, this is the book for you!

What Inspired You to Write Your Book?
Mainly my children. They enjoyed all the crazy stories that I would think up.

How Did You Come up With Your Characters?
I think about random things and make them up. I love SciFi, so there is a great deal of influence there from the classic Star Trek, Star Wars, X-Files, Twilight Zone, etc. I try to keep them silly for the kids.

Willakaville looked like any normal place you could see when travelling across the country. Everyone there lived in regular homes. There were typical people going to work, and ordinary kids playing outside. It was everything you expected to see in a small town. However, there constantly seemed to be something strange going on. You will see what I mean after I tell you this first story.

Billy was a run-of-the-mill twelve-year-old boy. He was average looking, average height, average weight, average intelligence, average at sports, and average at everything else. He never did more or less, than he was supposed to do.

On the way to school, Billy always walked with his friend Charley. They took the same path down the hill and across the bridge. It was not far, probably less than a mile, and only took them about five minutes to get there.

Charley was less than average in some ways and more than average in others. He was short, clumsy, and nerdy looking. On the other hand, he was smart, funny, and very fast.

Their day started out with Billy knocking on Charley’s door. Charley came out, and they began their walk to school. Being clum-sy, Charley tripped on the sidewalk and fell flat on his belly. Everything from his back-pack fell out. Pencils, pens, books, papers, an old sock, and two sticks of gum splattered across the concrete and grass.

Billy sighed as he helped Charley pick up all of his gear. He groaned, “Charley, why don’t you ever remember to zip up your back-pack. Once a week we go through this.”

Charley replied in his tiny voice, “I know, I know. I just get in a hurry and forget.”

Billy replied, “Why don’t you prepare your backpack at night like I do?”

Even though Charley sometimes frustrated Billy, he knew Charley was a great friend. Charley helped Billy at school and Billy helped Charley with his self-esteem.

They continued their walk. Continuing down the hill, they heard a strange noise. It sounded like a little mouse at first. The noise got louder and louder until they reached the bottom of the hill.

Then they heard a tiny, “Help Me! Help Me!” Both Billy and Charley looked around. However, neither of them could see anyone. “Down here!” the little voice cried. They both looked down. Inside a small crack in the sidewalk was a tiny black ant waving his legs back and forth.
“I am stuck,” the ant said. “Can you please help?”

Billy and Charley could not believe their eyes (or ears). How was it possible for an ant could be talking to them? Charley decided to talk first, “Hello Mr. Ant. How can we help you?”

The ant stopped waving his legs and said, “I got stuck on this piece of old chewing gum. Can you help me out?”
Charley replied, “Ok, let me look.” He got down on the ground and looked closely. Sure enough, the ant’s back legs were stuck to some chewing gum. “Hmm,” he said as he pondered how to get the any unstuck. “I will try, but no promises.” He then proceeded to take out a pencil, and used it to pry the gum and the ant from the crack.

“Be careful. Don’t hurt me please,” the ant pleaded.

Charley loved all animals, including in-sects. He had to find a way to help the ant, especially a talking ant. Then he remembered what he learned in science class about solids, liquids, and temperature. If he could make the gum cold, it would become more solid and less sticky, and the ant should be free.
“Hold on,” said Charley. “I got an idea.” This whole time, Billy just stood there frozen with his jaw open. Even when a bug flew in his mouth, he did not budge. Charley did not notice. He was too busy trying to help the ant. He reached in his backpack and rustled around for a few seconds. Finally, he pulled out an ice pack from his lunch. He always put one in there to keep his yogurt cool. He hated warm yogurt. He then placed the gum on the ice pack. After a few minutes, the gum be-came hard, and the ant wiggled his way free.

Finally, Billy came out of his daze, spit the bug out, and asked the ant, “How did you learn to talk?”

“I didn’t,” said the ant. Ants cannot talk. We do not have vocal chords.”

Billy and Charley both stared at each other, squinching up their noses with question-ing looks.

The ant laughed and said, “Look up.”

Billy and Charley both looked up to see a little man about two feet tall sitting on a branch high in a tree. He dressed in all white robes having pure white skin. He had no hair on his body and deep blue eyes.

With a low voice, the man said, “It was I who was speaking to you as if I were the ant. I wanted to see if you two were worthy enough.”
“Worthy enough for what?” said Charley. Billy and Charley slowly backed away as they waited for the answer.
“Worthy enough for the Gignoshlopz award. It is an award given to a being who shows exemplary kindness. Here is your prize.” Then the little man made two jars of mayonnaise appear at the feet of the boys.

The little man continued, “Now before you thank me, I need to sing you a little song.” He continued his words in a slow melody, “Blortz blortz gignoshlopz porp.” Then, right after the word ‘porp’, he farted very loudly and disap-peared.

The two boys instantly began laughing un-controllably. They were both rolling on the ground for at least three minutes.

“Did you see?” laughed Billy.

“What in the world?” laughed Charley.

After settling down, they got up, grabbed their jars of mayonnaise, and headed for school. They did not care at all about going to their boring old school since they had a great story to tell. They knew no one would believe them, even having the jars of mayonnaise as evidence. Nevertheless, they told the story anyway and got several laughs that day.

Now you know how it all started. The weirdness in Willakaville just got weirder and weirder. If you want to hear more about it, read the next chapter.

Author Bio:
Bald Guy is a genetically modified carrot-banana slug hybrid with mind controlling powers that allow him to implant silly songs into one’s brain. He is the supreme ruler over his bathroom and garage. He grew up in the sewers of the city of Glop on planet Toidy. After receiving his degree in bizzarology, he continued onto a career of laziness followed by several years of goofing off.