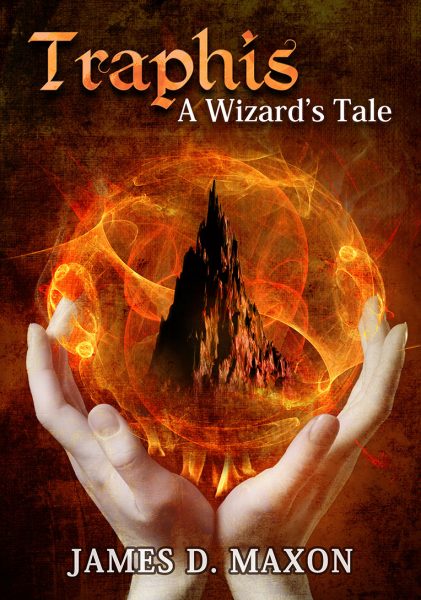 A year after the death of his father, fifteen-year-old Traphis stumbles across his father’s hidden collection of books. Forbidden from learning magic at a young age, he resolves to read the books in secret. Doors to a dark and formidable world begin to open, and a treacherous adventure awaits both him and his newfound friends. In their journey to fight the power of lies, betrayal, and greed, they discover that no matter how well they master their magic skills, they are powerless without the most important skills in life, such as the abilities to trust, care, and forgive.

What Inspired You to Write Your Book?
My love for fantasy stories. I started writing this book when I was 13-years-old but gave up because I just didn't know the craft well enough. Years later I heard that Christopher Paolini started writing Eragon at a similar age, which motivated me to try again. I spent the next two years researching the art of writing, submitting short stories, poems and novellas until I felt confident enough to rewrite Traphis.

Book Sample
A cool breeze glided through the forest trees. Creatures arose to a new day and scampered about in search of food. A skimpit darted from rock-to-rock, snatching up bugs with its long, red tongue, and the sound of a droning lorax filled the air.

“Sweeeme!” Braun shouted at the beast. The big, black hulk moved backward at his command. “Traphis, get that rope tied securely to the cart.”

Traphis pulled as hard as he could, fighting against the stubborn creature.

“It needs to come back a little farther,” Traphis said. “It won’t reach.”

“Sweeeeeeme!” Braun nudged the lorax with the tip of a rod. The creature thrummed a deep throaty noise and then moved another few steps.

It was enough; Traphis knotted the rope as fast as he could and then looped it around the metal bracket. “That should hold.”

“Do we really need to bring two carts?” Traphis asked.

“We can’t let all our hard work go to waste now, can we?”

Traphis had to agree. The last two days of increased labor were enough to motivate anyone. He rubbed his red palms together in preparation.

The two of them made their way to the lorax corral. As the gate opened, the creature’s eyes rolled to the side of its head and glared at them.

“I’ll leave this one to you, Traphis.” Braun handed him a rope.

A strong wind blew loose dirt and sand across the corral. Traphis reluctantly took the rope and approached the beast with caution. He felt like an expert, having done this all year on his own when plowing the field, but that didn’t make the process any more desirable. The lorax stood still, gazing at Traphis as he drew nearer. The rope soared through the air and landed around the beast’s neck. Traphis quickly wound the end around his wrist and pulled to tighten his hold.

“Sweeeme!” The beast obeyed Traphis’ command and followed behind him as he tugged on the rope.

Before Traphis knew what was happening, the lorax leapt forward. Not knowing what else to do, he held tight onto the rope, but soon found himself flat on his face. Another cry forced the beast forward in a run, dragging Traphis behind. Dirt rubbed against his skin and ate into his already reddened flesh. A sweet metallic taste filled his mouth as muffled yells echoed in the distance.

He tried to look up, but dust—kicked up by the lorax—forced him to lower his head in order to shelter his eyes. The ground vibrated from the weight of the pounding hooves and a heavy thumping throbbed in his ears.

His burning fingers fumbled down his leg until they wrapped around the hilt of his dagger. When he pulled it free, he forced it forward and cut the tangled rope from his wrist.

The binding released and the hammering hooves faded into the distance. Traphis lay still, sharp pain throbbed throughout his body, and a ringing echoed in his head. He rolled onto his back and took a deep breath of air. A peculiar sensation washed over him and he suddenly felt warmth. Not against his flesh, but against the inner walls of his consciousness. A bright glow of light flooded the corners of his hazy eyes, and then there was a sound like gentle waters flowing over stones in a brook. The harder he focused on the noise, the more it sounded like a voice.

Haunting, yet elegant words floated in the air. “Traphis, Son of Truth. Stand up.”

Bewilderment befell him. Was he unconscious? Was he dreaming?

“Prepare yourself,” the feminine voice continued. “There is one who seeks. One who wishes to destroy. Be on your guard. Traphis, you must stand. Stand to your feet.”

A blurry round shape appeared before his eyes. The glowing light faded and the warmth turned into an icy chill. Fear struck his heart as he blinked harder to see the form before him. A low growl rumbled and the shape increased in size. Traphis held his breath, trying to keep still, but his trembling legs wouldn’t stop shaking.

He tightened his muscles and tried to move, but he felt a force holding him down. Was it invisible? His eyesight was so cloudy he couldn’t tell, but this felt like something unnatural, something extraordinary, something mystical. He strained and flexed his arms, but they wouldn’t lift. He told his legs to kick, but they didn’t respond. No matter how hard he tried, he couldn’t move.

A dark shape streaked over him and the growling stopped. The blurry figure disappeared, and a moment later, two more shapes became visible.

“Traphis, are you all right?” Braun spoke in his ear.

He felt a soft hand grab his. Was it his mother’s?

Traphis’ vision was clearing, as if some supernatural force had blinded him. He leaned forward without resistance and turned his neck to look around. Pain shot through his spine. His limbs throbbed and his head pounded.

Lifting a hand, he instinctively swept at the dirt covering his hair. Blood trickled down his chin from scrapes on his face, and when he touched his burning skin, he pulled back from the pain. He imagined how he must have looked to his mother and grandfather, but rather than feel embarrassed, a smile of triumph creased his face.

Anjetta release her grip on his hand as he staggered to his feet.

“I think I just need to clean up and I’ll be fine.”

Traphis noticed a knife lying on the ground a few feet away, but it wasn’t his. He looked down and saw that he was still clenching the dagger.

“I’ve never seen anything like this before,” Braun said. He bent over and picked up the knife. “Who ever heard of a learcat appearing in broad daylight? Never before in all my years.”

Author Bio:
James Dean Maxon (1977-Present) was born at Elmendorf Air Force Base in Anchorage, Alaska. His parents were divorced when he was three-years-old. Raised in a strictly female household, James grew up in the midst of mental illness and depression. He, himself, struggled in school due to a learning disability.

Without a positive male role model, James learned how difficult it can be for children to realize their true potential. Having acquired a love for fantasy at a young age, he began to write stories of his own, providing children and teens with messages of faith, hope, and insight.