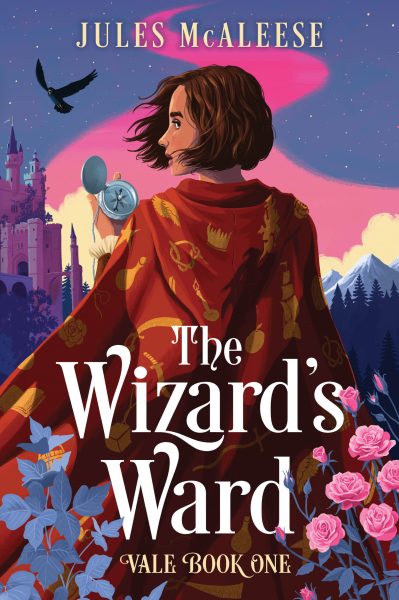 “I read this book in 4 hours (split between two days) while driving to Fl, and I couldn’t get enough of it. I also have loaned it to a friend and her daughter (remember, I got a physical book). When I get it back, my 16 and 14-year-olds want to read it. So yes, I liked this book and have been recommending it to everyone.” – Read With Me Blog

“Sometimes, it’s hard to find a new book that you instantly love. Other times, it is so easy to immediately fall in love with a book that you’ve only just been introduced to. Such is the case with this book, Vale: The Wizard’s Ward. This book is new, fresh, and a wonderful addition to young adult fantasy literature. A must-read.” – Perfect Prose Book Reviews

“If you love indie books (I lerve indies) and love wild romps through fantasy worlds with great characters and mildly complex plot lines, Jules McAleese’s The Wizard’s Ward is a book for you. It’s an upper YA with spirit, witches, wizards, spycraft, romance, pirates, dragons, and more… there are so many things that I loved about this book and most I can’t mention because they’re spoilers!” – The Story Eater

“This book is such a pleasant surprise. So many good twists and turns kept me up till 2 am needing to know what happens next! This YA fantasy is not just a page-turner, but it takes stereotypical characters and endears you to them. I loved the pace, the character development, and all the new characters introduced through the book!
The ending is brilliant!” – Ms. Moxy’s Book Blog

In the world of Vale, the King of the Elves lives in fear of an ancient prophecy. ‘Only a gray blood can kill the king’, or so it foretells.

But nobody in the land of Vale has gray blood: not the elves who rule the land, the mortals who inhabit the villages, the mer who rule the sea, or the witches who are engaged in a bloody and costly war with the elves. No one except Francis, and her life depends on keeping this secret.

When Billington, the King’s Wizard, brought under his protection a newborn baby, an infant hunted by the king’s Sleuths, his decision put both of their lives in jeopardy.

Fifteen years later and now the wizard’s ward, Francis is shaken as her protector disappears from the castle overnight, and she must enlist the help of her first love, a battle-ridden soldier named X, as she embarks on a quest of survival and self-discovery.

But outside the safety of the castle’s walls, a war is raging and Francis must endure betrayal and face a myriad of dangers plaguing the land of Vale as she seeks to find the only family that she has ever known. As she encounters shapeshifting bounty hunters, marauding pirates, and dragons that dwell in the witch’s mountains, can Francis uncover the true power of her gray blood? Or is the King’s prophecy just a thing of legend?

As the first installment of the young adult fantasy Vale series, this mystical tale is perfect for fans of Sarah J. Maas and Holly Black.

What Inspired You to Write Your Book?
While traveling across the United States on a Greyhound bus, I waited anxiously with a pen in my hand and a blank journal on my lap to meet my biological family. Somewhere along the highway in between Oregon and Texas, the story of Vale was conceived.

Book Sample
CHAPTER ONE
The Bazaar

Author Bio:
Jules hails from Portland, OR. She lives with her husband, daughter, and golden retriever in a house built in 1906, that she and her husband restored themselves. Before becoming a writer, she was a creative producer that worked in film, experiential and digital marketing. When she’s not writing thrilling fantasy stories for young adults, Jules can be found spending time with her family at the Oregon Coast or eating a burger at the local pub.