You are here: Home / Teen - Young Adult / YA - Science Fiction & Fantasy / The Road to Kalbakar (Wyrms of Pasandir #1) by Paul E. Horsman 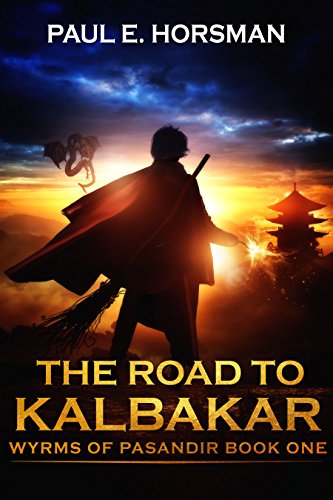 Seventeen-year-old Eskandar is the lowest of the low among the crew of the Navy sloop Tipred. As ship’s boy, he runs messages, gets the dirtiest jobs and tries to stay out of his betters’ way. It is a dull but safe life, for the tired old Tipred patrols a shipping lane to nowhere and nothing ever happens to disturb their peace.

None aboard know Eskandar’s big secret. For he is not alone. In his head lives the voice of Teodar, who has guided and guarded him all his life, and who is teaching him magic. Teodar is a mystery; he won’t say who he is or why he is helping him. Eskandar has stopped asking; the voice is his only friend, and that is all that matters to him.

Life goes on placidly – until the sea monsters appear. To save himself and his ship, Eskandar has to use his secret magic and manages to defeat the monsters. Now his enemies know him and his humdrum life becomes a maelstrom of action – fighting monsters, desert robbers and even more fearful enemies.

Will Eskandar’s barely tested powers be enough against an undead necromancer who wants him killed? And what about those mighty wyrms in the sky, are they friend or foe? Follow Eskandar’s adventures as he gathers a strange band of companions in his battle against terrible enemies in The Road to Kalbakar, Book One of Wyrms of Pasandir.

What Inspired You to Write Your Book?
Wyrms! It was the wyrms! But why? What had happened? I had to know why all the mighty wyrms of Pasandir had suddenly turned doddering and forgetful. So I dug into Eskandar's story and bit by bit I uncovered the truth.
Now, for my own peace of mind, I must write it all down. To start with, in The Road to Kalbakar. That's how it all begins…

How Did You Come up With Your Characters?
Well, they live there, don't they? The large island of Malgarth, the Chorwaynie Archipelago, the countries on the Continent, they are all there. It's a very diverse region, with many tropical islands. The Kell live on a high plateau, that's one enormous, purple-shrubbed plain, where wild lions roam the size of ponies. The lands of the Vanhaari and the Unwaari is enclosed by mountains; it is heavily wooded, with wild rivers, grasslands and many old ruins. The Pasandir Peaks are a mighty mountain range with little valleys where people live in castles and villages.
Of all people, only the tribes of the Vanhaari, Unwaari and Ma'aweshi are strange, for they aren't brown, or pink, but gray like the stuff their mountains are made of.

‘Out of my way, bilge rat!’ the first officer snarled as he pushed past me on the sloop’s crowded quarterdeck.

I shuffled my feet and mumbled. ‘Aye aye, sir.’
Idiot, I thought, irritated. You’re a boor, Lieutenant Wylmer; a flat-footed imbecile. I had totally had it with the Tipred sloop, her first lieutenant and the endless days of choking heat on this useless patrol.

Around us the sea was still and the wind dead as a six days old corpse. To starboard, the shimmering line of the Hellesands desert coast seemed glued to the sky and the dullness of it all made me want to scream.

I shifted my weight from one tired foot to another and leaned my back against the railing. Stand still, curse you! I watched Wylmer’s enormous bulk pass four feet away and fumed in silence. I’d been on duty since sunrise and after nearly six hours dodging my officer’s booted feet, all I wanted was my hammock.

‘I’m not!’ I knew he was teasing me, so I sent him a funny picture of me being terribly exhausted.

‘It’s hot,’ I complained. Teodar didn’t answer. Of course he didn’t; voices don’t feel the heat. Still, just knowing he was there made me feel better. Teodar’s bodiless voice had whispered to me for as long as I could remember. At first I’d thought he was a ghost living inside my skull somewhere. I even asked him once, all serious. He laughed in my face and teased me with ghostly boos in the middle of the night for the next week. It was funny, but he never did tell me what he was, and why he was helping me of all people.

I didn’t complain. Teodar was the one who’d practically raised me. He probably wasn’t all that much older than me, but he knew everything. He taught me magic, watched over me and kept me company, those early, wandering years in the Borderlands.

I remembered those mountains, the snow, and the company of people who said they were my parents but never proved it by showing a moment’s tenderness or even feeding me. Teodar told me how to catch rats and eat them raw. My parents would have let me starve, so I’d say he saved my life.

A trickle of sweat running down my spine called me back to the present and the hot tropical sun. With my dark gray skin, I didn’t have to worry much about sunburn, but the perspiration on my neck had dried to a horrible itch. Almost ritually, I scratched at it with the hook I have for a right hand and wished I could scratch at the boredom as well. Here we were, nearly a week out from Dvarghish Harbor, and not a single ship sighted.

The lieutenant shifted his bulk again, and I eyed him warily. It wouldn’t be the first time those heavy boots of his mashed my toes.

Suddenly, a flash of sky-blue uniform on the companion-ladder and a hearty laugh froze the lieutenant in mid-step. My exhaustion evaporated as the broomrider set foot on the quarterdeck.

We all stepped aside to make room for our passenger. Kellani of the Kell was a powerful girl with straight, short hair, a hawkish nose and a grin that nailed me to the deck planking as she lifted one reddish-brown hand in a salute.

There haven’t been many girls in my life; only the little shrews at the orphanage who were as horrible as the little bullyboys. I had avoided both like the plague.

Then I joined the navy. The Tipred was a mixed crew, but all female sailors were ancient; way past twenty. That made the arrival on board of a tough girl of my own age a Major Event. Especially one who was both nice to look at and one of those awesome broomriders. She was much bigger ‘n me, but I’m used to that. I’m disgustingly small for my seventeen years. “Skinny little beast,” the nice orphanage keepers used to call me.

I peered around the lieutenant’s back, hoping beyond hope the girl would discover I existed. I’d seen her often enough since she came aboard, but she never ever noticed me.

This time I must’ve breathed or something, for she did see me and winked. Navy discipline went by the board, and I grinned back like a maniac.

‘Strange ship at forty-one!’ The hoarse cry from the masthead made us all jump. The girl craned her neck, but then she must’ve realized the other ship wasn’t visible from the deck yet, for she smiled ruefully. Her hand went to the crooked broomstick on her back, and for a long second she looked about to fly away and investigate.
Then she relaxed as another cry followed the first.

I knew Ahaude. She was a Kell ship, a coal carrier. Like us, she’d be bound for Port Naar, the navy outpost on the desert coast.

The broomer caught my eye and gave a regretful smile. Maybe she’d also hoped for something exciting, like pirates.

I gave her a slight shrug and an apologetic grin. Welcome to the Tipred. Nothing ever happens here.

Lieutenant Wylmer had his usual moment of indecision. Big body, slow mind.
‘Let’s check up on her, Quartermaster,’ he said finally. ‘Show the navy’s presence.’

The petty officer was a stolid type, a real seaman, and he saluted without showing his thoughts.

‘Aye aye, sir.’ He relayed the order to the helmsman beside him, and the Tipred turned to intercept the big coaler.

Wylmer looked around the quarterdeck. ‘Where’s the little runt?’

Another of his games, I thought, exasperated. I’m at my post, fool; right behind you. Where else would I be?

‘Aye aye, sir.’ Knowing the broomer’s eyes were on me, I gave the lieutenant my No. 1 salute. He scowled suspiciously, but couldn’t find fault with it.

Without looking, I skirted his bulk and sprang down the companion-ladder to the main deck and Captain Malkim’s great cabin.

‘Watch out!’ Teodar shouted in my head.

Only then I saw the Old Man was already on his way aft and I froze in mid-jump.

A strong brown hand grabbed my collar and pulled me up before the unthinkable could happen.

The captain stepped onto the quarterdeck and halted in front of me. My cheeks burned as I urged the planking to burst open and swallow me.

Old Man Malkim didn’t say anything. He just raised an eyebrow at me dangling from the broomer girl’s big fist. Hurriedly, I brought up my iron hook in salute.

‘First-officer’s-compliments-sir-and-he’s-changing-course,’ I gargled, slowly choking to death in the girl’s grip.

‘I see,’ was all Captain Malkim said. ‘Thank you.’ With a nod, he walked over to the wheel.

I sagged as the girl transferred her hand to my shoulder. ‘Phew. Thanks, broomer; you spared me a hiding for sure.’

Author Bio:
Paul E. Horsman (1952) is a Dutch and International Fantasy Author. Born in the sleepy garden village of Bussum, The Netherlands, he now lives in Roosendaal, a town on the Dutch-Belgian border.

He has been a soldier, a salesman, a scoutmaster and from 1995 till his school closed in 2012 a teacher of Dutch as a Second Language and Integration to refugees from all over the globe.

He is a full-time writer of light fantasy adventures suitable for a broad age range . His books are both published in the Netherlands, and internationally.

His works are characterized by their rich worlds, colorful peoples and a strong sense of equality between women and men. Many of his stories, like The Shardheld Saga trilogy and The Shadow of the Revenaunt books, have mythological or historical elements in them, while others, especially Lioness of Kell and his upcoming Wyrms of Pasandir books, contain many steampunk elements.

This book is available in Kindle Unlimited: No