You are here: Home / Print Books / The Pit by Debra Breault 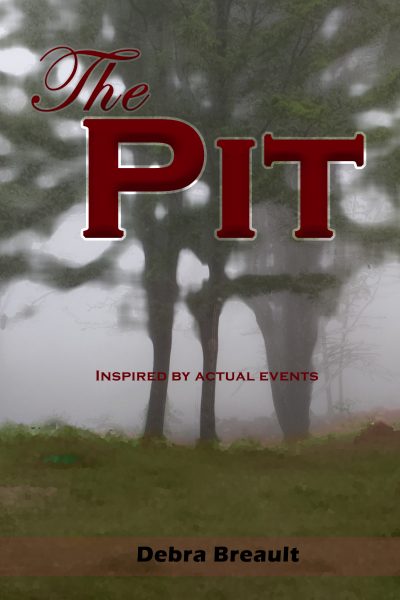 Inspired by the stories of The Money Pit on Oak Island, Nova Scotia.

For one hundred years, generation after generation of the Martin family has kept a secret. There is treasure hidden deep underground in the woods behind their home.

When the secret is revealed to Jack Martin, he is immediately resolved to be the one to solve the mystery. It won’t be easy. The treasure is protected by booby-traps and natural barriers and is seemingly unreachable. Thanks to Jack’s cleverness and tenacity, along with a little bit of luck, he eventually succeeds.

Unfortunately he finds something other than silver and gold hidden there and what was always thought to be a hunt for untold riches instead becomes the ultimate test of survival.

A novel for teens and young adults about survival, trust, and family.

What Inspired You to Write Your Book?
I have always been interested in mysteries – Stonehenge, crop circles, pyramids, etc. I first learned about The Money Pit on Oak Island more than fifteen years ago. I was hooked immediately. This book is one wild version of how the Money Pit might have been created. I hope you enjoy it!

As the school bus pulled away, Jack stood right where it had dropped him off and stared blankly forward. The hair on the back of his neck had suddenly stood up. His brow creased and a shiver ran the course of his body. Then as quickly as it had started, it was gone, and he felt himself relax.

Thinking that it must have been the result of his liberation from school, he dismissed it and took the first step toward home.

As he continued to walk along the narrow, dirt road he started sweating profusely. It had to be close to 80 degrees. It’s too hot! he thought. As he had been getting ready for school that morning, it had been a typical cool, spring morning and he had worn both a long sleeve shirt and a jacket. He had removed the jacket during the day as the weather quickly warmed up. Now, after he had gotten off the bus to walk home, the heavy, long sleeved shirt he was wearing was causing him to overheat.

This kind of heat always made him irritable. He looked up again at the sky – not a cloud to be seen. Then he looked around. On the road to the remote island where he lived, there were no people to be seen either. I have to do it, I can’t take it anymore, he thought as he pulled his sweat covered shirt over his head and breathed a sigh of relief.

Jack began walking again at a leisurely pace down the long lane which went across a causeway and onto the island where he and his family lived. The Martin family had lived on Oak Island, off the Western shore of Mahone Bay, Southern Nova Scotia since 1912 when Jack’s grandfather had bought their house and started a dairy farm.

He was halfway across the causeway when he heard someone running toward him from the island. He stopped walking and looked ahead. Before he could throw his shirt back on, around the corner came his sister, Grace, running at full speed and headed straight for him.

Grace was twelve, only a year younger than Jack. It was obvious to anyone who looked at them that they were siblings and they were often thought to be twins. They both had the Martin family trait of blue eyes and sandy colored hair and a slight splash of freckles across their noses. Grace’s hair was long and almost always tied back in a bun, Jack’s was short with a little bit of a wave in it. Jack had always been taller than Grace, but lately she was gaining fast. He was currently about one quarter inch taller than her. They stood back to back often to check heights. Jack would check to make sure he was still taller. Grace checked because she was sure someday soon, she would be taller, and she couldn’t wait to rub it in.

To Jack’s envy, Grace had stayed home from school to help her mother clean out the green house and prepare it for seedlings. She ran toward Jack, arms flying and slightly hopping. When she was close enough to Jack she stopped abruptly and shouted excitedly, “Jackie!! Dad says you should come right away! Something important is happening!”

With a smile of excitement, Jack answered, “Yea? What?”

“I don’t know!” Grace cried holding her hands out in anguish. “But Dad said I should come get you and bring you back as quickly as I could! Come on!!” She said while turning back toward the island and motioning him on.

Jack caught up to Grace and together they took off at a swift run for the house. Even without the prospect of a surprise, when their father said come quickly, they did. Another hundred feet, then a right and down the road to their small clapboard home.

As they arrived at the house, they could see their father and mother in the front yard. Their father, William Martin, was gesturing and talking a mile a minute to their mother with his hands waving around. You could see the excitement on his face. As the children arrived, Mr. and Mrs. Martin caught a glimpse of them coming and turned to face them.

“What do you mean, Pa? The oil?” Jack questioned, his excitement matching his fathers.

His father walked over to him and bent down. He reached out his arm and ran a weather worn hand down the side of Jack’s face.

“Well Jackie, not quite. It’s a long story, but about time you heard it,” he said with a huge grin. Then standing up and making a swinging motion with his arm, he called “Come on inside. I have a lot to tell you.”

Mr. Martin wrapped his arm around his wife and tugged her close. Then they started off toward the house. Grace was close behind, but Jack stood frozen in place.

At the steps to the porch Mr. Martin stopped and looked back at Jack. “What are you dawdling for? Don’t you want to hear it?” he asked. Heck yes! Jack smiled and rushed off after them.

Author Bio:
I live in the beautiful mountains of New Hampshire with my husband and four children.