You are here: Home / Childrens Books - Middle Grade / The Misadventures of Mallory Malo by Kenn Crawford 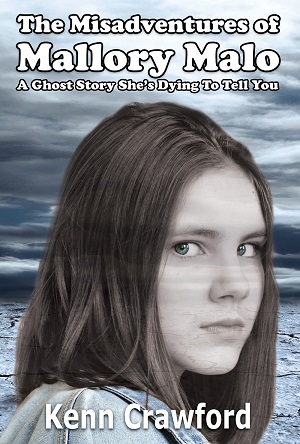 It’s the first day of summer vacation and twelve-year-old Mallory, armed with too much imagination and not enough common sense, sets out to prove she really does have a guardian angel, only to discover that everything she believed is not quite how she imagined it, especially when her bullying cousin Jo visits the farm and proves to be more trouble than Mallory or her guardian angel can handle.

What Inspired You to Write Your Book?
When I was writing my second book, The Saga of Bayou Billy, a young girl was a huge fan of the weekly stories, but because she was too young for some of the content, her mother would read them to her. When I heard about this, I wrote a story for her that she could read. Years later I decided to rework that story and turn it into a middle-grade book.

Author Bio:
Born in Toronto in 1966, Kenn Crawford grew up in the coalmining town of Glace Bay on Cape Breton – an island off the coast of Nova Scotia, Canada.

Growing up, Kenn was painfully shy and spent his childhood reading books and making up stories; a hobby that led to his love of writing – poetry, songs and short stories. Eventually he began writing books and screenplays; he wrote a weekly newspaper column about songwriting and home recording, and he was showcased in The Cape Bretoner Magazine as the featured songwriter.

In 2016 he took his love of making up stories to the next level by writing, shooting and directing short films. He won the Canada Shorts Director’s Award of Commendation in 2018, and he founded Film Cape Breton – a non-profit organization designed to help bridge the gap between local, independent filmmakers and the viewing public.

Kenn lives in his hometown of Glace Bay with his fiancé, Margie, shooting short films and music videos, teaching writing and filmmaking workshops, and is currently working on several new books, including the sequel to The Misadventures of Mallory Malo.