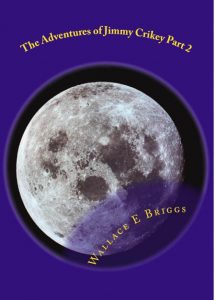 Jimmy Crikey, was an unusual boy who was mercilessly bullied because of his strange appearance. Endowed with a bright red shock of unruly hair, big blue eyes, overgrown pointed ears and enormous feet, Jimmy just did not fit in and decided to run away in a search for a place where he could find happiness.

In the magical world of Roombelow Jimmy faced many challenges and in a new environment his true character shone through as he overcame the obstacles. Once Jimmy discovered his true origins his happiness and self-confidence increased tremendously. “How else would you expect a child from the star-world of Attalia to look?”

In “The Adventures of Jimmy Crikey – Part Two” Jimmy decides to return to his home planet Attalia in search of family connections. This adventure story recounts the events that occur when Jimmy returns to his birthplace – star world Attalia. The hidden star ship is reactivated with the assistance of Aunt Ethel and its progress through space-time is aided by XRU, the on-board talking computer. As commander of the ship Jimmy experiences some of the comforts and wonders of a civilisation far in advance of what he has known on Earth. Food and drinks materialise on request; doors slide open on command; showers both wash and dry automatically; squares of material shrink fit to form perfectly tailored suits.

Automation extends to the ship’s defence systems which are brutally battered and eventually breached during Jimmy’s explosive skirmish with the marauding forces of the evil Kursh, from the planet Ock. Forced to abandon the crippled star ship Jimmy struggles to free XRU before ejecting in a life support capsule.

Guided by the capsule’s emergency beacon the Attalian Rescue Mission plucks Jimmy to safety and he is befriended by its Commander, Zaru. On Attalia Jimmy is welcomed by President Alpha, who rewards his bravery by conferring on him the honorary rank of Commander. Alpha insists that Jimmy be his guest in the Presidential apartments when it is discovered that there are no surviving members of his family.

The next day after an early morning meeting in the star council chamber, Zaru conducts Jimmy on a guided tour around the wonders of Attalia. One of the many highlights is the visit to an arena to watch a Magnetron match: a team game loosely resembling ice hockey but without sticks or skates. Players balance on small discs which hover and glide over the the translucent ice.

Meanwhile tension builds in the face of an anticipated major attack from Ock. It is believed that Kursh has developed a new laser capable of breaching the Attalian defences. Jimmy persuades the usually peaceable and defensively minded Attalian council to launch an attack against the approaching Ock forces. There follows a brief interplanetary war waged with missiles, lasers and force fields. They succeed in thwarting the Ock onslaught but realise that it is only a temporary setback to the ambitions of Kursh to rule over Attalia.

Jimmy devises a strategy to save the situation and, assisted by Zaru and XRU, he devises a plan to close the time warp that links Attalia to Ock. The destruction of the warp maroons the kingdom of Kursh forever in nether-space and permanently closes the time portal between Ock and Attalia. Once continued peace is assured Jimmy must decide: should he stay on Attalia to enjoy the benefits of an advance civilisation or return to his family of friends in Roombelow?

What Inspired You to Write Your Book?
After recounting the stories of Jimmy's magical adventures in Roombelow, I was under pressure from my son to tell more stories about Jimmy's home planet of Attalia. What was it like? Did he get to go back? Yes, there was a hidden starship but Jimmy had never flown anything, in all his life. How could a mere boy get to fly such a complicated ship through the stars?
These questions needed realistic answers to satisfy a young, active, querying mind.
And again something magical happened. Once I started recounting Jimmy's exploits the story just flowed from my pen (well, biro actually). In those days I wasn't into computers but fortunately, my wife, Pat, was a skilled shorthand/typist, and she lovingly kept pace translating my scrawl into the printed word.

How Did You Come up With Your Characters?
Jimmy had already been born in my first work, The Magical Adventures of Jimmy Crikey.

Author Bio:
Wallace Briggs (1943 – present). first met my future wife while walking home from school at the age of eleven. Married in 1964, Pat and I spent many happy years in the North East before employment almost took us off to emigrate to Jo'berg, South Africa but plans were changed in the final weeks and instead the company moved me to Sussex.
After more than twenty years in Sussex, then Hampshire, employment was again responsible for the move to beautiful rural Lancashire.
Jimmy Crikey was born one rainy day, many years ago, during a family holiday in Great Yarmouth, to entertain my son and his new found friends for an hour or so.
This is the second story in the series of The Adventures of Jimmy Crikey. Adventure number three is well underway.
It is my hope that these stories they will bring a sense of wonder and enjoyment to yet another generation.