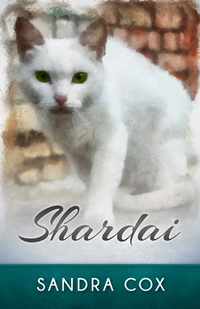 Shardai is a large sleek cat with attitude. He has the courage of a tiger and the disdain of a king. He has only one weakness–his guardian. He’ll do anything, even come back from the afterlife for her.

What Inspired You to Write Your Book?
I lost my cat to cancer and mourned. I wanted him back. So I wrote a fantasy about a cat that used one of his lives to come back.

“For troubled shores now thee leave
Man’s imperfections to receive
With mortals weakened, faulty shell
So shall ye among them dwell…”

Ramses paw shot out rigidly in front of him.
Shardai was gone, leaving a wisp of blue smoke floating in the spot he had inhabited only moments before.

Author Bio:
Sandra is a vegetarian, animal lover and avid gardener. She lives with her husband, their dog and cats in sunny North Carolina.
Her stories consist of all things Western…and more. She is a category bestselling Amazon author, Eppie finalist and Golden Ankh Award winner.