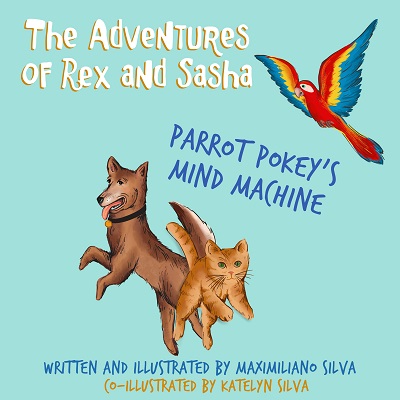 What if your pet had a secret?

Rex and Sasha are your average neighbor dog and cat, burying bones and climbing trees. But when the evil parrot Pokey makes a terrible plan to take over human minds, they put on their secret agent gear to stop him.

They must race against the clock along with their fellow fox agent, Belles, to stop Pokey’s plot, save their humans, and make it home before those humans realize they’ve been gone!

What Inspired You to Write Your Book?
I saw my mom helping people to write and publish books, and I decided I wanted to be an author too! I really love animals and I had the idea. So I told my mom about it, and she helped me make it real.

Book Sample
Rex groaned as he fell out of the tube onto the tile floor of the secret agent base.
Sasha arrived at the same time, though with grace. “Clumsy as always,” she said with a chuckle.
Rex just shook his head, his ears flapping as he did so, and looked toward where their boss, Flop, was waiting.
He was a fluffy brown rabbit, with pink ears and brown eyes.
“Special Agents Rex and Sasha, so glad you could make it,” Flop said.
Agent Belles, a yellow fox, was already waiting.
“You all have a new mission,” said Flop. “The evil parrot Pokey has built a new machine that he’s managed to connect to a big satellite.”
“The machine is overriding the satellite, and humans tuned in are being brainwashed to be like parrots. Humans in the neighborhood have been seen squawking and flapping their arms like they’re crazy!”
“If evil parrot Pokey succeeds, he’ll be able to control all humans, and take over the world.”
Rex gasped! “Oh no! We can’t let that happen!”
Sasha and Belles nodded in agreement. “Let’s go, team!” said Sasha.

Author Bio:
At just six years old, Max Silva decided he wanted to write and publish his very own book. Thus was born The Adventures of Rex and Sasha. Maximiliano Silva lives with his family in Texas, and enjoys building, drawing, and designing homes. He loves his tarantula, Fuzzy, and his two dogs. Max looks forward to releasing more Adventures of Rex and Sasha in the future.

Katelyn Silva is a 3x bestselling author and the founder of The Author Mentor, helping writers who have struggled for 10+ years to write and publish a bestselling book and establish a growing author platform for success. Katelyn has published numerous other books under a pen name and loves a variety of other activities including crochet, reading, and music. Katelyn enjoys being a mom to her children, inspiring them to pursue their dreams, and spending time together with her husband and all the pets.