You are here: Home / Free and Bargain Books / Bargain Books Under $3 / Journey To Osm – The Blue Unicorn’s Tale by Sybrina Durant 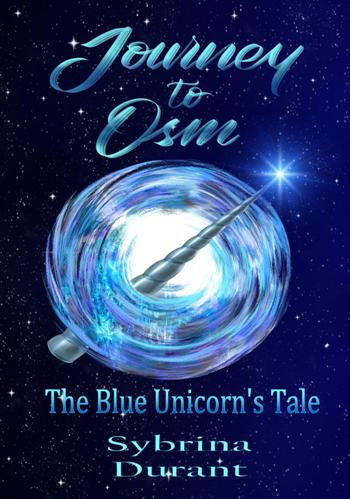 Journey To Osm – The Blue Unicorn’s Tale by Sybrina Durant

Take a fantastic journey across the Land of MarBryn where the magical metal-horned unicorn tribe from Unimaise was accidentally stranded years ago. After a century, the entire tribe has nearly been decimated by a powerful wizard who collects their horns and hooves to increase his own magic and control over the land. The prophecy that a savior would come along to lead the unicorns back to their home world seems to have turned into a cruel hoax but the least likely candidate steps forward to answer the call. He has no metal and he has no magic and that seems to spell only doom but the tribe has no choice other than to trust that he will be the one to save them all.

What Inspired You to Write Your Book?
When I was younger I enjoyed reading books about unicorns. I also enjoyed learning about the properties of different kinds of metals and I wondered if I could write a good story about a tribe of metal-horned unicorns. I developed a book with the premise that these metal-horned unicorns had magical powers loosely based on real world metal science.

How Did You Come up With Your Characters?
There are 12 metal-horned unicorns in this story. Each one has a different metal on their horn and hooves and each one has a different magical power. For instance, the copper horned unicorn's magic allows her to purify water. I got the idea for that because throughout time, it has been known that copper vessels have the ability to decontaminate any water that is stored within it. Copper literally kills molds and bacteria. Her power was further expanded into having magical dominion over just about anything containing water, including tornadoes!

The entire tribe stood gathered in anticipation of his birth. Not so long ago, they would have been shoulder-to-shoulder, hoof-to-hoof at such a gathering, but their numbers had dwindled.

Bunched together in the Halstable courtyard, every member of the tribe squinted toward a closed door and waited. On the other side, Miral labored to deliver her baby.

The Oracle had foretold this day, but her vision lacked details, so the Metal Horn Tribe of Unicorns were filled with many unanswered questions.

What powerful magic would this foal’s horn possess?

Which metal would define his essence?

When would this tiny new unicorn free them?

Would he enter the world with the power to rid them of the evil that hunted them?

Or—would they be forced to suffer for a while yet before the prophecy was fulfilled?

What was taking so long in the birthing room?

For a few seconds no one could see into the darkened entrance. Dust motes floated in the spectrum of light contrasting against the dim interior. Bits of straw tumbled out into the light.

Something stirred in the shadows.

Then, a tiny unicorn stepped forward on shaky legs. Behind him, his dam nuzzled the foal forward with her soft, velvety snout.

Blue. His body was dull blue, but no one focused on the color of his coat for long because something else was gravely wrong.

Of course, all unicorns were born with dull, rounded horns to prevent damage to the mother, but this foal’s horn appeared far more stumpy and much more odd than any the tribe had ever seen.

Disappointment rippled through the group as a dull hum of gasps and groans. Slowly, the tangle of mutters resolved into exclamations of disbelief.

The Oracle held up an aluminum hoof to silence the crowd. A hush fell upon them, until one lone, pitiful voice rang out, “We’re doomed.”

That set off the crowd in yet another round of frenzied outcries.

“That thing doesn’t even look like a real horn!”

“Look at his hooves. They have no metal either!”

The foal shrunk back, hiding beneath his mother’s belly.

Never before, had a metal-less unicorn been born to the tribe. The foal’s own mother, Miral, displayed a stunning horn of a shiny metal called indium, which gleamed as bright and pure as a looking glass. Any unicorn, who peered into its mirrored surface, saw their own image reflected in its soft, silvery veneer.

The magic of Miral’s indium horn also allowed her to look straight into another’s soul. Her heart ached for her child, for she knew the unforgiving world in which they lived. Without magic, life would be tough for any unicorn, although life had been plenty tough for them all since Magh rose to power and turned MarBryn into a frightening land.

Alumna, the unicorn Oracle, squinted at the tiny newborn. Her vision had foretold his birth and, yes, she had expected a stronger foal, but who was she to question the Moon-Star Spirit? Their savior looked very frail indeed, and in this moment, she had a hard time believing he would ever be anything but weak. However, as the Oracle, she must not let the tribe lose hope because hope was all the Metal Horns had left.

The wise Oracle felt sick at the injustice. This pitiful little thing would forever, be saddled with the disappointment of this day. So much hope had been placed on his small mundane shoulders, and now the entire tribe was ready to collapse under that heavy burden.

All around the Halstable courtyard she heard the mutters of condemnation … condemnation of … this little blue foal … of the prophecy borne of her own magic.

“The Oracle was wrong!”

The Oracle wanted to calm down the herd. These ugly comments were not dignified and in no way befitting a unicorn’s good nature. She understood they were scared, and as a result, they were now both giving up hope and giving in to their fears. Nevertheless, this unnatural meanness had to stop.

Unicorns were never mean, but of course, the dark pall Magh had cast upon this land was changing the nature of all things in MarBryn. . .even unicorns.

Still, she would be compassionate, even if the others refused. The rose-colored Oracle called to the baby’s mother loudly enough for the whole tribe to hear, “Miral, please forgive us on this most difficult day! If the Moon Star Spirit says he will grow to be a strong stallion, you must believe. We must all believe.”

The sorrowful new mother raised her tearful eyes. “Do you really think so, Alumna?” The anguished unicorn’s voice rose and fell as she wrestled with her despair in a battle that would not be won that day.

Alumna saw how much Miral wanted her words to be true. She desperately wanted to agree, but before she could find the words, another voice called out.

“No one believes this blue runt will save us! No one.”

Tears fell from Miral’s eyes as she bowed her head to nuzzle her foal.

“Enough!” Nix, a nickel-horned unicorn whom everyone in the tribe respected, stepped between the crowd and the mother and son. “No one here knows what the future holds,” his eyes locked on Alumna’s, “but, for better or worse, we must stick together. Savior or not, this foal is now one of us.”

Alumna did not know if she should thank him or be offended, but at least the furor of disappointment had dimmed. She went to Miral and leaned forward to gently touch the tip of her horn to her friend’s in a gesture of solidarity. Then, she did the same with the tiny nub of the little blue foal. In that instant, she caught the vision of silvery blue moonlight cascading down through the clear dome of the Halstable. In that flickering image, she saw a magnificent blue stallion with a brilliant horn, aglow with powerful magic.

Hope rose within her once again, but the image faded and the sight of the disfigured little lump of the foal’s plain hide horn reminded Alumna that, this was not the first vision she had gotten tragically wrong.

For joining the author’s email/newsletter list you will get:
free book