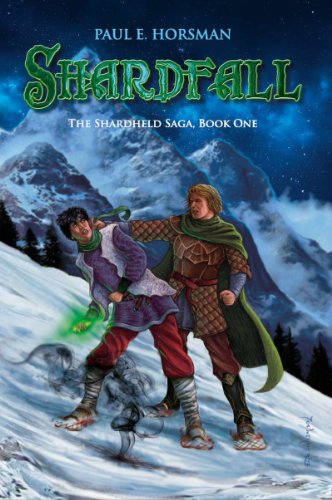 Muus is only a thrall, a chattel without rights, but he knows the small, blue shard he picked up belongs to him alone. His commonsense saves their lives from cold and starvation.

Kjelle, heir to the Lord of a rich mininghold, is spoiled, and covetous of his thrall’s tantalizing find. His greed causes an avalanche that leaves both young men marooned on an icy mountain slope.

Birthe, young wisewoman and huntress, mother of baby boy Búi, is brave and clever. She knows her way through the snowy wilderness of the Norden and her songs are filled with magic.

Now the three young people are bound together on a danger-laden journey to a lost and burning land, where Muus needs to connect the skyshard to the Kalmanir, the standing stone that is the world’s wellspring of all magic. The Kalmanir’s time is almost up and it urgently needs to be replenished before the magic of Gods and men runs out. The two boys have to learn to trust each other, for all around them, enemies abound. Rebels threaten both the kingdom and Kjelle’s holding, and a tribe of mad idolaters is trying to recall the banned primordial Old Gods. Even more imminent is Muus’ danger, for it comes from nearby, from the shard itself.

An action-packed adventure in a snowy land full of betrayal, rebellion and danger.

Book Excerpt
Rough hands shook Kjelle until he opened his eyes. ‘Wake up.’ A voice whispered.

‘Freya, help me; do wake up.’ It was Birthe, her face wet with tears and with blood from a long gash on her right eyebrow.

Kjelle felt his heart pounding in his chest. ‘What's happening?’ he said, while he fastened his snowshoes and grabbed in the dark for his backpack.

‘Swinne!’ The girl’s face was a snarling mask of hate. ‘That mangy rat killed Asgisla. His men are plundering the house; we must go before they come here.’

Kjelle began to sweat, ‘Muus! Lazy bastard.’ He shook the limp body. ‘He won’t wake up.’

‘Control yourself.’ Birthe’s voice was like a whiplash. ‘It’s the dream water. You must carry him.’

Kjelle made a face. ‘Carry him?’

‘You don’t like him. That doesn’t matter, pick him up.’

The holderling bent down and lifted the unconscious Muus from the ground. ‘He does not weigh much.’

'Easy! You don’t have to break his arm.’ Birthe looked out the door. ‘There’s no one. Come, quickly. ‘

Like two frightened shadows, they fled into the dark. It was snowing as they hurried through the forest, Kjelle with Muus over his shoulders and Birthe, deep in her cloak, silent. The ruddy glow of Belisheim’s torches faded in the twilight and soon there was nothing but snow and the creaking of overloaded branches. Kjelle lost all sense of time and direction. Blindly, he followed Birthe until they came to the gaping mouth of a cave. A familiar smell greeted him, bringing memories he hastily repressed. Beside him, Birthe raised her hands and began to chant. She waited and listened, but nothing moved. ‘It’s empty.’

Kjelle followed her inside and looked around. The cave was wide enough for them to sleep in and so deep that it protected them from the wind. He stooped and laid Muus down. ‘Do you know where we are?’

The girl looked at him. Her bloodied face was gray, her eyes red from crying and her hands gripped the staff she carried as if it rooted her to the firm earth. ‘I know the whole area. A bear lived here, but hunters slew it last summer. I expected the cave to be empty; its spirit is still strong in here.’

‘Will they find us?’ Kjelle felt his voice trembling. Birthe brushed her sleeve across her nose; tears glistened in her eyelashes. ‘I don’t think so. They were mad with mead and beer. Besides, it’s snowing hard; our footprints will be long gone. No, even their wolf-noses won’t find us.’

The holderling relaxed slightly. ‘Then we’re safe for a while. Where did you get that wound?’

‘One of Swinne’s men wanted to hurt me. I objected, but I was a bit slow. The Fates were with me, though, his knife was meant for my throat.’ Her face tried to smile. ‘He was so eager. When I left him, he was trying to get his entrails back inside.’ She brought her fingers to the wound, but then hesitated. ‘How big is the cut?’

‘From your eye to above the nose,’ said Kjelle. ‘It’s still bleeding.’

Birthe took from her coat a tightly wound roll of cloth and a small bag of dried leaves. ‘Can you bind it?’

Kjelle nodded. ‘My father wanted me to know something of battlefield healing.’

‘A sensible thought. Wrap some yarrow leaves over the cut, they’ll help it heal.’

Kjelle swallowed. Wisewoman Siga had shown him how, but never with a real wound. While he bound the long bandage over the cut, he looked at the girl. She saw him not, with empty eyes she stared at the snow outside. She‘d been confident, so frighteningly self-assured. With the pack on her back, the quiver on her hip, a sheathed bow over the shoulder and on her belt a hunting knife as long as his forearm, she looked more like a warrior than a Völva. Disemboweling her attacker… he shivered. ‘What have you got under your cloak?’ he asked, laying the last knot in the bandage. ‘It’s moving.’

Birthe gasped and grabbed the bag. ‘Oh, little man,’ said she, ‘you must keep your arms inside. It's too cold to wave.’

‘A babe?’ Kjelle’s voice was shrill. ‘You’re carrying a babe with you?’