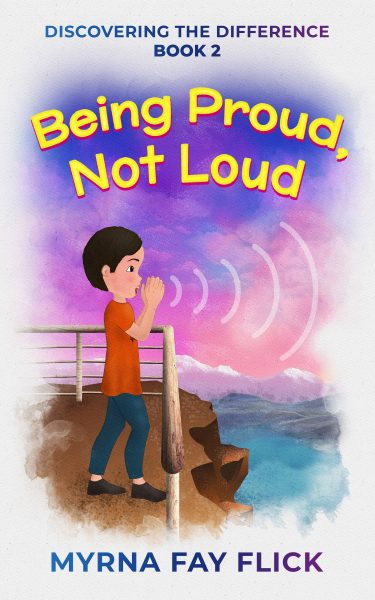 Imagine a world without boasting and bragging to feel accepted and loved.

When Mr. Moto announces a class trip to Echo Ridge, Danny starts bragging how his father has the school record for the longest and loudest echo. The class doesn’t believe him, as Danny brags more than anyone else. When Danny’s father chaperones the outing, the students see there may be a reason for Danny’s boasting.

Find out how Nick, Danny’s friend, inspires support, compassion, acceptance, and understanding of being different while learning a valuable life skill about humility. It’s okay to be proud without having to brag.

Book Excerpt
The class was excited when Mr. Moto announced they would be doing a science experiment at Echo Ridge. Echo Ridge was at the northern-most edge of Mystic Valley. Mountain-high caverns soared so high above a blue lake it looked like a sparkling blue marble from the top of the ridge.

Mr. Moto pointed to the whiteboard in front of the room where he had drawn what looked like backward letter Cs, which grew larger from left to right. “An echo is a sound that is repeated because the sound waves are reflected back. Sound waves can bounce off smooth, hard objects in the same way a rubber ball bounces off the ground,” he explained. “Although the direction of the sound changes, the echo sounds the same as the original sound. We are going on a field trip to Echo Ridge to create echoes as the walls are very high and smooth.”

Danny Winthrop began talking without raising his hand. “My dad holds the record for the longest, loudest echo,” he exclaimed. “No one has ever created an echo as good as his.”

“I appreciate your enthusiasm,” Mr. Moto said, “but please remember to raise your hand before speaking.”

“Yeah, okay,” Danny said, “but my echo is going to be as big as my dad’s. Probably bigger.”

“Well, everyone will have the chance to create an echo on our trip,” Mr. Moto said. He gave the students slips of paper to take home. “Ask a parent to sign this slip, saying it’s okay for you to go Echo Ridge with the class.”

Mr. Moto smiled at him and said, “Do you have something to share, Nick?”

“Yes, sir. Can someone not in the class come with us?”

“If you want a parent to come along, that’s fine,” Mr. Moto said. “We need some chaperones to come with us. Otherwise, this trip is just for our class.”

Lakeisha raised her hand. As she tried not to blurt out her question, her cheeks puffed out so she could hold in the words. She held her breath until Mr. Moto finally called on her. She let out a big breath and asked, “What’s a chaperone?”

“Great question. A chaperone is someone who comes along on a field trip to make sure no one in the class gets lost or hurt.”

“Chaperones are for babies,” Danny blurted out, again without raising his hand. “My dad lets me go by myself anywhere I want. I could go to Echo Ridge all by myself and make the biggest echo.”

“Danny, you must remember to raise your hand before you speak. If you talk again without raising your hand, you will not be allowed to go to Echo Ridge with the class,” Mr. Moto said.

Danny sat in his chair, crossed his arms in front of his chest, and pouted for the rest of the hour.