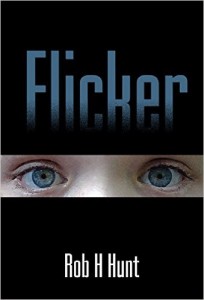 Meet Joel. He’s 13 years old. He loves soccer, frozen yogurt and hanging out with his friends. His life is pretty typical until the day he wakes up and discovers that nobody knows who he is… not his friends, not his family, nobody.

He thinks he is all alone until he meets Sara – a teenage girl who has also been forgotten by everyone she knows. Joel and Sara team up to try and understand what is happening to their lives, but things quickly turn from bad to worse. Before long, it becomes clear that time is running out for them both.

What Inspired You to Write Your Book?
The story of Flicker started out with one simple idea. What would happen if you woke up one morning and nobody knew who you were? All of your friends, family, people that you see everyday, think that you are a stranger.

How Did You Come up With Your Characters?
I love to write about regular everyday kids who are suddenly placed in unexpected situations, and this defines Joel perfectly. I like to see how the character will respond to what happens to them and how it changes them.

I wanted Sara to seem a little more mysterious, because from Joel’s perspective she is. If you think about the story from Sara’s perspective, however, everything she says and does makes perfect sense.

Book Sample
Joel walked down the driveway and saw his mom’s car parked in front of the garage. He wondered how his parents would react to what happened at FroYo’s. Knowing his luck, they would think he had lost his card and made up the whole story so he wouldn’t get in trouble.

The garage door was closed, so Joel walked up the steps to the bright red front door. He turned the handle, but it was locked.

“You’re kidding me!” he cried. The front door was never locked! Never, ever. But today, of course, it was locked. He rang the doorbell and waited. A few seconds later, his mom opened the door.

“You would not believe the day I am having,” he said as he stepped past her into the hallway. “It is unbelievable. And where were you this morning?”

His mom took a step back and gave him a quizzical look. “Who are you?” she asked.

“Don’t even start,” said Joel, “because today is not the day to be funny. I think I’m going back to bed and starting again.”

He took a step towards the stairs, but his mom gripped him on the shoulder. This wasn’t a loving, gentle, reassuring gesture that a mom might make, but a firm and slightly uncomfortable grip.

“I said, who are you?” There was something about her voice that alarmed Joel. It was definitely his mom’s voice, but something was different. It had an edge to it that he was not used to hearing. For a brief moment, he thought he might burst into tears – something that he had not done for years – but he fought back the urge.

“What’s wrong with everyone today?” he cried. “Did everyone wake up this morning and decide to make Joel’s life miserable? If they did, it’s working really well!”

His mom started to move him back towards the front door. “I don’t know who you are or what you want, but you need to leave right now. If you’re in trouble, go see the police. We can’t help you here.”

This was too much for Joel. He shoved his mom aside and sprinted up the stairs. “Really?” he yelled. “You don’t know who I am? Perhaps my bedroom will remind you.”

“Get down here now or I am calling the police myself!” shouted his mom. “You do not belong here!”

Joel couldn’t believe what he was hearing. This was his mom talking. The one person in the whole world who would always be there for him, always take care of him, always love him. And now she was screaming at him to leave.

Joel heard the back door slam. “What’s going on in here?” It was his dad.

“Dad!” he yelled, choking back a sob for the second time in sixty seconds. “I’m up here!”

His father strode into the hallway and glanced at his wife who gave him a frightened look.

“There’s a teenage boy up there,” she said, pointing up the stairs.

His father looked at Joel carefully. “OK,” he said. “There is no need to be frightened. Just come down and we can talk.”

“What’s wrong with mom?” asked Joel. “Is she sick or something? She doesn’t know who I am.”

His dad put one foot on the bottom stair. “Listen,” he said. “I don’t know what’s going on here, but I can tell you are scared. Just come downstairs and we will sort everything out. If you need help, we will find you help. Just come down quietly.”

His dad took another step up the stairs. “Everything’s going to be OK. Just come down and we will sort everything out.”

Joel started to shake. “No, no, no,” he whispered. He backed away from the stairs and ran down the hall to his bedroom. Except there was no bedroom. There wasn’t even a bedroom door. It was as if his room had never existed.

A wave of nausea washed over Joel and it was all he could do to not throw up. He hit the wall with the palm of his hand. “Where is my room?” he screamed. “What have you done with it?”

Rob loves to read (too many books to mention!), watch TV, drive his bright red car (but not at the same time as reading or watching TV) and spend time hanging out with his family. Speaking of family, Rob lives in Connecticut with his wife, three sons and pet goldfish.

Link To Buy Flicker On Amazon