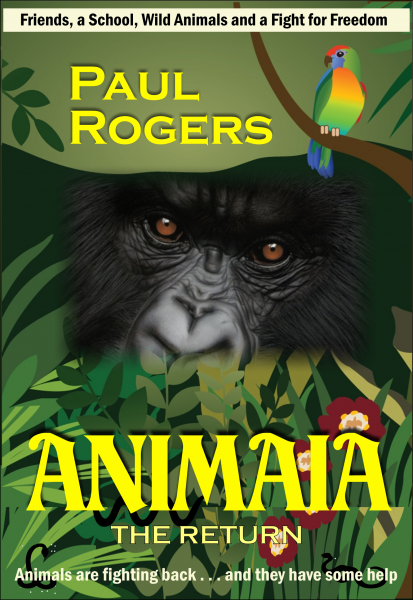 “Harry Potter meets Dr Dolittle”
ANIMAIA – The Return is a high-concept story of a unique world under threat and the psychic and material personalities destined to rescue it. Several books are planned for the series, although book one can stand alone. ANIMAIA is suitable for 12 years to adult, features allegory, parody, fantasy, science and some dark themes with elements of magical realism . . . but does not miss opportunities for irony and comedic exchange. The story arc builds exponentially beyond the early chapters as the main characters attend high school. Powerful female characters are a feature of the book.

Arno Steele can communicate with animals — and he’s very, very good — as his dad discovers when Arno is four. Now at thirteen in his hometown of Lemurville, Arno is looking forward to holidays at the beach with his favourite school friends before going to high school. Except Arno and his friends are no ordinary kids, they are Anima. In the country of Animaia, where animals were liberated in the Great War over 100 years ago, the Anima are the ‘animal talkers’, an elite few percent of the population who have inherited an ancient ability to converse with animals in that silent telepathic stream they call ‘syncing’. Yet Arno is not just any Anima; he is especially gifted because he can sync with four classes of vertebrate animals — mammals, reptiles, birds, and amphibians — not a single class like most of his fellow Anima. Some, especially his mother, think he could be the Truemore, the ancient, legendary saviour who, some say, will one day return to save Animaia at a time of great peril — but to his school friends, he’s just Arno the freak-boy.

Arno’s growing tired of his mother’s wacky expectations. Now, he’s not even sure he wants to attend the famous Anima school, the Dolotty Institute of Primal Intelligence (DIPI), after all. But when he saves his best friend Leroy from the jaws of a monstrous snake as they walk along the jungle verge at the beach, he understands the depths of his talent. Life’s getting complicated for Arno as he and his childhood best buddies — Leroy, Ashley and the willful Charlotte — are growing up and seeing each other in a more romantic light.

When Arno attends DIPI boarding school, he and his school friends, animal friends and a quirky bunch of Anima teachers find themselves at the centre of a gathering storm as the heretical forces called ‘fleshers’ plot to return to the days of animal exploitation and torture once more. Beguiled by the Crater Nebula and the mysterious dinosaurs and inhabitants that survived the last global extinction, Arno struggles to understand his place in the history and evolution of Animaia, and ultimately he must face the cruel, head flesher, Zacharias Carnivale, at school jungle camp in a fight for his life, as his human and animal friends race to save him. The battle for the soul of ANIMAIA has begun.

The story is more magical realism than fantasy, and although ‘young adult’ in essence, the deeper text and ideation is a fusion of philosophy, post-modernism, allegory and parable that adults may understand and enjoy.

What Inspired You to Write Your Book?
A lifetime of environmental conservation interest and campaigning, and a lifelong interest in fantasy and adventure stories like Harry Potter and Lord of the Rings resulted in the idea for the world of ANIMAIA.
In addition, I contemplated a world where animals were free and not just resources for humans to exploit.

I am a fan of fantasy of many kinds, but like many, my favourites are Lord of the Rings and Harry Potter. Being a long-term environmentalist and animal rights advocate, I sought to combine elements of both in a unique fantasy setting that included some science as well — thus the world of Animaia (Animal Gaia). This is a unique combination of urban and contemporary fantasy, paranormal milieu and magical realism. The time is right for such an environmental saga that can appeal to many.