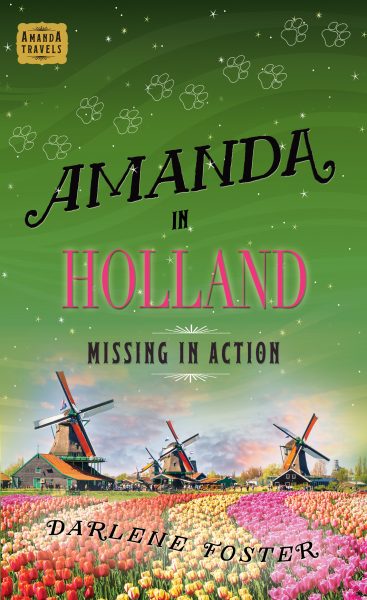 Alongside her best friend Leah, Amanda is in Holland to see all the sights: tulips, canals, Anne Frank House, windmills, and even a wooden shoe factory. She is also keen to find out what happened to her great uncle, who never returned from World War II. What she doesn’t expect is to find and fall in love with an abandoned puppy named Joey. While trying to find a home for him, she meets Jan, a Dutch boy who offers to help, a suspicious gardener, a strange woman on a bicycle, and an overprotective goose named Gerald. Follow intrepid traveler Amanda around Holland as she encounters danger and intrigue while trying to solve another mystery in a foreign country. One reader commented, “This book is action-packed and filled with interesting tidbits of information about life in Holland, WWII and perseverance and determination in unraveling a mystery. Amanda is a clever and kind girl who will appeal to middle school and young teenagers who will admire her pluck.” – Robbie Cheadle

What Inspired You to Write Your Book?
I have always been intrigued by Holland ever since I read a book called Hans Brinker or the Silver Skates by Mary Mapes Dodge when I was nine years old. When I finally visited the country, I fell in love with it. I decided it would be a great place for my heroine, Amanda Ross to visit and have an adventure. I included tulips as they are my favourite flower and since I have a rescue dog, I decided to add in a cute puppy as well.

Book Sample
Amanda Ross adjusted her glasses and peered up at the tall colourful houses as she stepped off the curb. The scalloped roofs pierced the sky, making her feel shorter than usual. She didn’t notice the bicycle until it was too late.
The woman cyclist swerved to miss her. The bike clattered against the railing. An avalanche of vibrant tulips tumbled from the basket, landing at Amanda’s feet.
“Dombo!” shouted the woman.
“I’m so sorry.” Amanda dropped to her knees and frantically picked up flowers. She held up a white one with red stripes. “This one is so pretty.”
“It is called the Canadian tulip. It was created for the one hundred and fiftieth anniversary of Canada.”
“Really? I’m from Canada.”
“That is very nice, but you really must watch when you cross the street here in Amsterdam. There are many bicycles.”
“I am so sorry about that. I’ll be more watchful from now on.” Amanda lowered a large handful of colourful tulips in the basket attached to the front of the woman’s bike. Something moved at the bottom of the basket.
Before she could see what it was, the woman quickly covered it with tulips. She shoved a Canadian tulip under her nose. “Here, you can have this one.” She got on her bicycle and skilfully made her way through the throng of pedestrians and other bikes on the bridge that crossed a canal.
“Are you OK?” Leah ran up to Amanda. “We should have warned you about bicycles.”
“Maybe you should stick closer to us.” Leah’s dad noticed the flower in Amanda’s hand. “What have you there?”
“A Canadian tulip. The woman who almost ran me over gave it to me.”
Leah pointed. “Hey, there is the Dutch Pannenkoeken House I told you about. Let’s get something to eat. I’m starved.”
This time Amanda looked both ways before crossing the street.
“Mmmm, these sure are good.” She took another mouthful of a flat pancake heaped with apples, cinnamon and whipped cream. “Thanks a lot for inviting me to join you
here in Holland.”
“I had to be here on business and Leah wanted to come
along. It’s one of her favourite places. She needed some company.” Mr. Anderson smiled. “Besides, it’s always nice to see our young Canadian friend.”
“Yes, and we have so much catching up to do. Emails and texting are great but it’s always better to chat in real life.”
Leah grinned at Amanda.
When they stepped out of the restaurant, a cluster of bikes flew by. Amanda thought she saw the woman who almost ran into her among them.
“Can we go on a canal tour boat, Dad?” asked Leah. “It’s such an awesome way to see the city.”
“Sure, that’s a good idea. That way Amanda can get a good view of things from the water. I recall she enjoyed the sailboat ride off the coast of the Isle of Wight.” He ruffled Amanda’s short brown bob. “Just a quick ride today.”
They boarded a long, low boat that took them at a leisurely pace through busy canals. Mr. Anderson explained, “Amsterdam was built around the canals. The city is below sea level.”
“Why doesn’t it flood then? Why don’t the houses sink? And why are they so tall and skinny?” Amanda had so many questions.
Leah smirked and pulled back her long blonde hair into a ponytail. “I’m sure my dad, the engineer, will be able to explain all that.”
Mr. Anderson cleared his throat. “Well, the houses in Amsterdam used to be taxed on frontage, so they built tall, narrow houses to save money. Wooden stilts, driven into the wet ground before construction, were used to support the houses. That is why they don’t sink.”
Amanda pointed. “Why is that one over there leaning sideways?”
“Due to the wet ground, some of the supports are now rotting, causing houses to tilt and sink into the earth. They now build houses with concrete.”
Leah rolled her eyes. “I think it is time to get off the boat as I have had enough of the construction lesson.”
They disembarked at the next stop in front of a shop with large wheels of cheese piled high outside the door. Once inside, the sour milk scent of cheese greeted them. A cheerful girl in a pointy white hat with wings on each side handed
out samples.
“Yum, this cheese is so good.” Amanda smacked her lips. “Let’s buy some for a snack later.”
Mr. Anderson took out his wallet. “Good idea. We’ll take a wedge of Gouda and one of that one we just sampled.” He pointed to the cheeses.
“You mean the Edam?” asked the sales clerk. “These are good choices.”
While Leah’s father paid for the purchase, the girls went outside. Amanda heard a whimpering sound. “Did you hear that?” she asked Leah.
“Did I hear what?”
“A sound like a baby or a baby animal. I think it came from over there.” Amanda pointed at a large garbage can across the road. “There it is again!” She stepped off the curb.
“Amanda, watch for bikes!” Leah shouted.
One whizzed past, barely missing Amanda. She didn’t even notice. She headed for a cardboard box sitting beside the smelly garbage. Bending over, she opened it. Curled up in the bottom, a brown and white puppy, with the biggest chocolate brown eyes she had ever seen, stared up at her.
The puppy whimpered and put his head between his front paws.

Author Bio:
Brought up on a ranch in Canada, Darlene dreamt of travelling the world and meeting interesting people. She has always loved to tell stories and was encouraged by her grade-three teacher to write them down. She is the author of the exciting adventure series featuring 12-year-old Amanda Ross who loves to travel. Readers of all ages enjoy travelling with Amanda as she unravels one mystery after another in countries such as the United Arab Emirates, Spain, England, Germany, Holland and her own country, Canada. When not travelling herself, Darlene divides her time between the sunny Costa Blanca of Spain and the west coast of Canada.