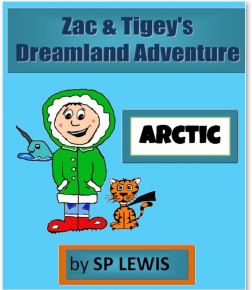 When Zac goes to bed at night and falls asleep he enters a world of dreamland adventures. He is joined by his favourite cuddly caped toy Tigey. Through their journey of an icy winter wonderland in the Arctic, they discover friends and animals along the way. They escape dangers and discover new places before returning home again. Join them on their amazing journey.

What Inspired You to Write Your Book?
I really wanted to capture children's imagination letting them filling in the blanks. It is important to me to help children grow in their appreciation for the world around them in this case the Arctic – the people and the animals that live there.

Every night at 7pm, Zac brushed his teeth, put on his pyjamas and jumped into his warm, soft bed. He cuddled his favourite toy— Tigey—and closed his eyes. Zac couldn’t wait to fall asleep because when he slept the adventures began. Where would tonight’s adventure take Zac?

Zac woke up with a start. He was wearing a big, fluffy winter coat that enveloped him from his knees to the top of his head, where the hood almost entirely covered his face. His boots were toasty warm too. He was in a snowy winter wonderland. Where are we Tigey?” he asked. There was no answer. Zac searched for Tigey, but Tigey wasn’t there! “Tigeeeey, Tigeeeey,” he shouted. Zac panicked; Tigey had never been missing before. As he searched the snow crunched under his feet. He spotted something in the snow and went to investigate. Zac had a good idea who, or what, it was. He could see a wiggling black and orange tail, and he knew that something was making it wiggle.

“What happened to you?” he asked. Tigey’s bum was in the air while snow buried the rest of him. “Are you stuck in there?” Zac asked as he grabbed Tigey’s back legs and pulled him out. Snow covered Tigey’s head and his eyes blinked furiously because the sun was so bright. He stood on all four paws and shook himself. Snow went everywhere. “Right, there’s only one way to find out where we are—we need to find clues, we need to go exploring,” said Zac.

They hadn’t walked far when they heard a blowing noise. It was really loud. It was EXTREMELY loud! Like a very large someone blowing their nose. They heard it again, and again. Suddenly, a massive spray of water shot up into the air—once, twice, three times! Zac moved closer. Tigey decided to stay a few steps behind. He wasn’t scared; he was just being careful—very careful. Zac still couldn’t see what was making the noise. In a sheet of ice—not far away—was something that looked like a big pond. Zac watched the pond. A head popped up, followed by a huge spray of water. The water came from a hole in the creature’s head. Another head appeared, followed by another spurt. Soon the pond was full of the spurting creatures.

Author Bio:
I'm a welsh born Author from the small town of Port Talbot known for it's steel making. Drawing and painting are some of my other interests and I have tried to incorporate these into my book to compliment my writing.