You are here: Home / Audiobooks / Wyoming Bones and the Potion of Everlife by Elden Walseck 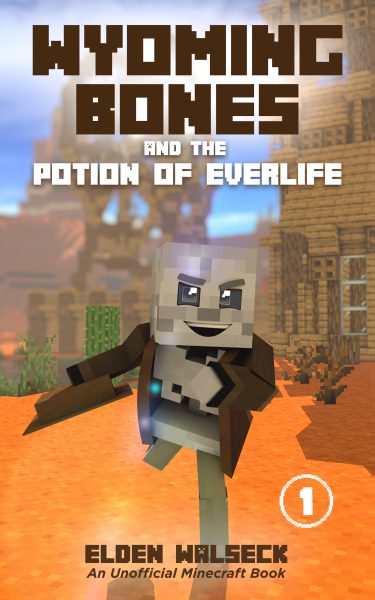 The world of Minecraft is full of ancient tombs needing exploration, and Wyoming Bones is just the human-turned-skeleton adventurer for the job! It’s a race against time as this archaeologist and treasure hunter tries with his friends to out-think and out-run the villainous Dr. E. Ville as both search for the ancient Tower of the Witch and an artifact with great power.

Wyoming and his friends are on a quest to locate the elusive Potion of Everlife before the ruthless Dr. E. Ville gets his hands on it. Legend has it that the potion can restore life or stop a person from dying. But Wyoming and company must hurry if they’re to find the artifact and save the city of Cubero.

The plot offers plenty of interesting settings, levers, secret passageways, arrows, trap doors and the like to engage elementary-aged readers. It includes old temples made into Adventure Zones. Beasty “ravagers.” Numerous puzzles, riddles, and traps. Be sure to bring your imagination and prepare for a fast-paced fantasy ride filled with adventure.

Follow Wyoming and his friends as they face challenges, craft solutions, and fight their way through mobs to retrieve the artifact and save the city of Cubero!

Written for an elementary reading level, this story captures the imagination of children and parents alike! A perfect balance of silly Minecraft exploration and daring adventure and stunts, this series is bound to become your new shared obsession.

DISCLAIMER: THIS BOOK IS A WORK OF FANFICTION; IT IS NOT AN OFFICIAL MINECRAFT BOOK. IT IS NOT ENDORSED, AUTHORIZED, LICENSED, SPONSORED, OR SUPPORTED BY MOJANG AB, MICROSOFT CORP. OR ANY OTHER ENTITY OWNING OR CONTROLLING RIGHTS TO THE MINECRAFT NAME, TRADEMARKS OR COPYRIGHTS.MINECRAFT ®/TM & © 2009-2020 MOJANG / MICROSOFT

What Inspired You to Write Your Book?
As a parent of young children, and a book lover, I am always on the lookout for books we can read together and enjoy. I reached a point where I was frustrated with the quality and storylines of what we were reading, and started daydreaming about the kind of book I wish I was reading. Wyoming Bones was born and has come to life in three books (and counting) over the last few months, and writing about him has me just as excited to follow his story as our readers are.

Wyoming Bones, archeologist and treasure hunter, stepped into the jungle temple. The place was a mess, but that is what he expected of an old, hidden ruin.

“Yuck!” he said, as he stepped into a spider web just inside the door. He wiped the web from his face and looked around. The green stone walls were cracked and there were skulls of skeletons sitting on the floor.

Even though Wyoming Bones was a skeleton himself, he didn’t like seeing the skeleton skulls. He hadn’t been a skeleton for long and hoped he could find the magic item needed to turn him back into a human in this temple. Soon he would have his beautiful hair again! Thinking about his hair, he pulled his explorer hat down on his blocky skull.

Wyoming tried hitting the stone with his iron pickaxe, but he couldn’t mine it. Just like he thought. This ruin was an Adventure Zone, like most temples and ancient places were.

He wouldn’t be able to break blocks here to find the treasure. He’d have to do this the hard way.

The first room only had one exit. It was a stone stairway in the center of the chamber. Trying to walk quietly with his bony feet, he crept down the stairs. As it got darker, Wyoming made sure to bring out a stack of torches, putting them on the wall every few blocks. He might be a skeleton, but he still needed to see where he was going!

As he entered the room at the bottom of the stairs, he saw a carving of a spider on the wall ahead. Was this temple made by spiders? Did the people who made it really like spiders? Distracted by the spider picture, Wyoming didn’t watch where he was putting his feet. When he heard the “click!” of a pressure plate, he froze and looked down.

“Oh no! A trap!” Wyoming said, quickly diving forward into the room. Just in time! An arrow from a dispenser whizzed over his head and clanged against the wall next to him. As he stood up, and dusted himself off, he heard another puff of air, and then another. More traps!

Wyoming sprinted forward, heading to the exit from the room. The arrows flew right behind him, barely missing him! One actually got stuck in his leather jacket, it was so close.

Finally, he was through the room, and in a long, dark, hallway. He put his hands on his knees and sighed a loud, “Whew!” That had been a close one. Hopefully that had been the only trap room. He winced as he realized that he had just jinxed himself. There were definitely going to be more traps now.

Author Bio:
Elden Walseck has been having adventures in the world of Minecraft for over a decade now. He, along with his wife and kids, enjoy exploring and creating in this land of blocks. When he isn’t crafting stories, crafting blocks, or spending time with his family, Elden works as a rocket scientist at a rocket factory.