You are here: Home / Teen - Young Adult / YA - Paranormal / Wishing You Were Here (Soul Mates #1) by Cathernie Chant @Catherine_Chant 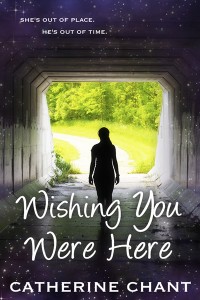 Travel back in time to 1957 for a little drama, a few life or death moments, and a lot of rock ‘n’ roll romance in the young adult time travel romance WISHING YOU WERE HERE.

Ambitious music fanatic Callie Reinard is headed to college with plans to one day run her own radio station. Her younger sister thinks Callie’s been focusing so much on grand plans for the future that she’s not living in the present.

When an accidental wish sends Callie back to 1957 to save music sensation Joey Tempo from an untimely death, her sister’s criticism proves true. Callie finds herself plan-less, floundering in a situation she’s had no preparation for. Hard as she tries to “fit in,” her modern way of thinking causes nothing but trouble for herself and everyone around her. Including that charismatic singer she saved from death. He may be her age, but he’s five decades out of her league and already engaged to a stunning, sophisticated beauty queen–someone much more comfortable with life in 1957 than Callie will ever be.

So, what’s a girl to do? Follow her heart or follow her plans and dreams? Either way, Callie’s in for a change. Either she needs to change her dreams for the future, or change her mind about what her heart wants, because getting out of 1957 isn’t as easy as getting in. At least not without losing the one thing she never knew was missing–her soul mate.

What Inspired You to Write Your Book?
The tragic loss of rising stars like James Dean and Eddie Cochran.

How Did You Come up With Your Characters?
Joey Tempo was inspired by singing stars of the 1950s who died too young, and Callie Reinard evolved from the initial idea of a heroine who loved oldies music more than contemporary music.

Book Sample
Callie couldn’t put the album down. She traced her finger across the name, then flipped it over to read the back. “Nana, who’s Joey Tempo?” Kind of a corny name, really. Probably a novelty record. It would make a nice addition to her vintage album collection, though, even if it wasn’t right for the party.

“A singer from the 50′s,” her grandmother answered without pausing in her work. “Like Elvis Presley.”

Like Elvis? “Yeah, but I’ve heard of Elvis. How come I’ve never heard of this Joey guy? Was his music any good?”

Her grandmother stopped what she was doing and turned in Callie’s direction. A wistful smile crossed her face. “You know, I haven’t thought about him in a long, long time.”

Callie rolled her eyes. She couldn’t see herself ever feeling that nostalgic over a pop star. In fact, she couldn’t stand today’s manufactured pop music at all. It had no substance. Too electronic. She much preferred music from the 60′s and early 70′s. Something about it felt more real, like you could grab the songs with your hands and hold on to them, especially around the time of Vietnam. Now that was music with substance. It meant something. When she ran a radio station, it would definitely feature those classic tunes.

“Joey Tempo was fabulous,” her grandmother whispered, like it was some great secret, which apparently it was because Callie had never heard of him. “I had such a crush on him.” Nana giggled. “My girlfriends and I played his records every night.”

“Then how come he’s not as famous as Elvis?” Although she preferred the 60′s, she’d absorbed a few facts about the 50′s music scene as well. Strange how someone popular enough to have Nana and her friends going all crazy could slip under her musical radar like this.

Her grandmother resumed sifting through the open box in front of her. “Lots of singers in those days had only one or two hit records. Teenagers could be so fickle. One minute Buddy Knox was all the rage, the next it was Bobby Day. Elvis was very lucky.”

Or talented. “I think I have enough things for the party. Do you mind if I take this record to listen to later on?”

“Oh goodness, no. Go ahead. It’s yours. Take it to the party if you want.”

“I suppose you’re right. Me, I don’t care what decade it comes from. If it sounds good, I’ll listen to it.”

Callie smiled. Her Nana was nothing if not practical. She collected the album, the Kennedy sign and a couple pennants featuring her high school mascot, still a jaguar, she’d found in the trunk. On her way to the stairs she picked up the box of old appliances as well.

“Wait.” Her grandmother stopped her at the top step. “I think I have a book about Joey Tempo in there somewhere.” She rummaged through the contents of the trunk, removing old jackets and ballet shoes. Finally she lifted out a thin, crumpled fan magazine.

“Here it is.” After a longing glance at the cover picture, she showed it to Callie. “It’s like those Rolling Stone magazines all over your bedroom. I think you’ll find his story interesting.”

Watching over her grandmother’s shoulder as the older woman thumbed through the pages quickly, she started to understand Nana’s fascination with this singer. Forget his story—look at that face! The airbrushed, plastic pose on the album cover hardly did him justice. The more casual shots that accompanied the text showed Joey Tempo in a completely different way. He had a smile that lit up the page. His dark hair and sexy sideburns were pure Elvis, but he didn’t look like he could snarl if he tried. He seemed too darn happy. Like life was one big party, and he was bringing the tunes. If he were around today, female fans would eat him alive. So, where was he now?

Author Bio:
Award-winning author Catherine Chant is a PRO member of the Romance Writers of America (RWA) and a Golden Heart® finalist.

Catherine worked for 15 years as an IT computing & communication consultant at Boston College before becoming a full-time writer. She currently teaches several online workshops for writers at various RWA chapters throughout the year. Her non-fiction work has appeared on numerous websites where she writes instructional articles about computing, gaming and crafts.

Catherine is currently working on a new young adult suspense novel, and the next book in her Soul Mates series. In 2013 she released the first of two Vampire Diaries novellas for Amazon’s Kindle Worlds program. The second will be released in the spring of 2014.