You are here: Home / Picture Books / What Happens When Unicorns Fart? by Michelle O’Healy 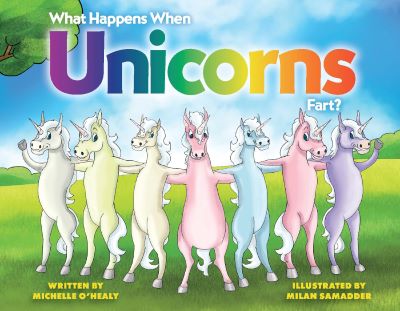 What do beans, brussel sprouts, and dairy have in common? Aside from being healthy, they are well known fart generating foods. We know what happens when humans cut the cheese, but what about Unicorns? One boy decides to find out and discovers there’s only one thing more magical than a Unicorn; their farts. When a young boy introduces nearby Unicorns to fart-making foods, incredible things begin to happen. Life for all of us will never be the same.

What Inspired You to Write Your Book?
It would please me to no end to give an eloquent answer to this question. The reality is, I was trying to keep my kids entertained. I'm a homeschool Mom and found I could keep my children placated in the car or in lines by telling them stories. This story originally formulated when the kids were newly into unicorns, and also found the word "fart" hilarious.

I know what happens when Dad farts…
He blames the dog, and everyone runs from the room.

But, do you know what happens when Unicorns fart?
I decided to find out.

Author Bio:
Michelle O'Healy was born in Mt. Vernon, Washington. Her father joined the military shortly thereafter, and the nomadic lifestyle became an ingrained part of her DNA. The military stationed Michelle's family in Germany twice, in addition to other locations around the US, but always returning home to her Grandparents tulip farm.

She began High School in Georgia, and finished the last two years in Washington State. After college, marriage, and the birth of her first child, Michelle returned to Europe to live in London for four years, where she welcomed her second child into the world.

Michelle returned to California, and continued raising her children and homeschooling on a boat for seven years, at which point adventure beckoned. They sailed from California to Baja, into the Sea of Cortez, and hung out in Mexico for a while. Feeling the call of the sea, they left Mexico, crossed the South Pacific, and explored French Polynesia.

She now lives in the Bay Area, California, looking forward to the next adventure.

Story telling has always been a passion for Michelle, but her greatest joy is writing picture books, where her sense of humor can run wild.