You are here: Home / Children's Books / Children's - Fantasy / Watch What You Wish For by Valerie Anne Hudson 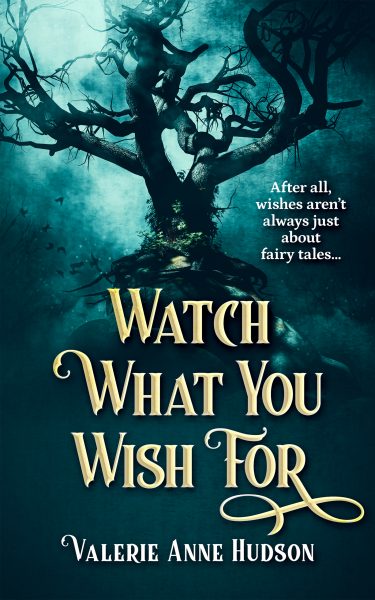 The friendliness of small-town life doesn’t appeal to 12-year-old Sophie, who has recently moved to Mariposa from the big city. Despite herself, she ends up making friends with two other adventurous seventh-graders. Upon their discovery of an ancient Wishing Tree they accidentally unleash the tree’s evil powers and turn the once-thriving town of Mariposa into a shadow of its former self. As people go missing and lives are turned upside down, our unforgettable heroes are desperate to get things back to the way they were, while each unknowingly embarks on a journey of self-discovery.

What Inspired You to Write Your Book?
I love to be entertained by creepy stories of the supernatural! Nothing too horrifying, though, and I'm certainly not a fan of anything that involves killing or hurting people. Like Sophie, our main hero in the book, I moved to a small rural town from the city and found it hard to get used to at first, especially the vast expanse of surrounding forests. After all, who knows what strange phenomena may lurk in those forests?

Book Sample
I gazed in disbelief at the desolation. The town looked forlorn, forbidding, forsaken. Graffiti everywhere. Store windows looking like they hadn’t been washed in years. Signs leaning crookedly into the wind; the occasional beer can clattering along the gutters. Not a single patch of grass to be seen; not a flower or a tree to relieve the monotony. What few passers-by there were hurried along with their heads down, deliberately avoiding eye contact. They looked miserable, angry, and most decidedly unfriendly.

It was hard to believe that our once-thriving town had undergone such a transformation in just a couple of hours. Only this morning, the tree-lined main street had bustled with locals and tourists. Even though it was October and the weather was getting cooler with the approach of winter, colourful hanging baskets adorned the streets and people gossiped cheerfully as they sipped coffee on the patios. Store fronts gleamed, while not a single piece of garbage littered the street. And even if it had, you can guarantee some concerned citizen would have immediately whisked it up and deposited it in the nearest garbage can.

But that’s Mariposa for you – everyone being so neighbourly and helpful.
Until now, that is. On a normal day, you wouldn’t be able to walk a block before being greeted with enough ‘good mornings’ and ‘how’re you doings’ to last you a lifetime. Being from the city, it’s something I could never get used to. But now I think I’ve changed my mind about that.

Besides the condition of the town, my seventh grade teacher, Ms. Nightingale, had vanished off the face of the earth. Along with our poor old neighbour Mrs. Clutterbuck. Not only were they both missing, apparently they had never even existed!

And the worst part of all? This was ALL my fault!

Author Bio:
After teaching middle school for 25 years, Val is now retired but still stuck in that mindset, particularly when it comes to storytelling in the fantasy genre. Stories of evil spirits, wizards and ghosts are constantly running around in her head, which can be somewhat of an interference when she’s working at her other job: serious copywriting gigs for grownups. Based in Ontario, Canada, Val is a truly awful cook and a voracious reader.