You are here: Home / Print Books / Verntropa: The Balance by E.L. Clarke 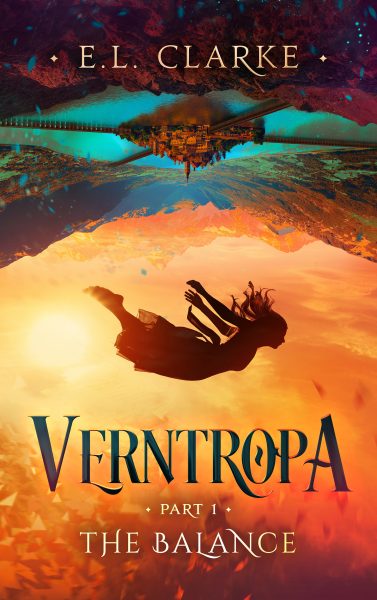 When we dream, where do we go?

Olivia Merton has only ever known Earth after the shift. For fifteen years there has been no sunshine, little rain…and resources are scarce.

A recurring dream provides an escape from her troubled monochrome life and leads her to a vividly coloured landscape, populated by four distinctive societies.

Her attempts to describe her dream-memories are met with distrust and she fears for her grasp on reality – until she discovers that Earth is in danger and a mission on Verntropa awaits her if she is to fulfil her destiny.

Does Olivia have the prophesied power needed to strengthen the balance between her two worlds, or will it, and she, be damaged beyond repair?

As Olivia’s fate unfolds, she is thrown into a fast-paced adventure where she discovers the meaning of trust and true friendship. One thing is certain – her life will never be the same again.

What Inspired You to Write Your Book?
To share an imaginative story with young adult readers. Books shaped my life when I was a teenager and I want to use my creativity to provide young readers with an escape to another world.

Book Sample
Swatch took his usual seat in the sun where he could view the town centre and still talk to Reginald.
‘Busy day today, aye, Reg,’ Swatch said.
Reginald forced a grimace.
‘Yes. So many have come through. The pests.’
Swatch chuckled to himself as he admired the humans Reginald possessed such a clear distaste for. The humans walking around the town centre, blissfully in their dreams.
He was sure they were in awe of being in such a beautiful, wondrous world of which they would have no memory when they woke up on Earth shortly after. But Reginald was a Sherva and simply did not see the beauty in the same way as Swatch.
‘Now, now, Reg. How can they be a pest if they don’t even intend on coming here? They’re simply dreaming. It is nothing but a dream for them, that is all. And look, they do no harm.’
Swatch pointed to a particularly attractive woman walking straight towards them. He knew she was dreaming because she had the clear bubble of protection around her – a security measure put in place by the Shervas so they wouldn’t get injured while visiting and so rogue humans could be easily identified. Swatch looked on as the woman walked towards him. For a moment, it looked like she was staring directly at him. But she turned away, took a seat by the nearby fountain, and began to splash water on her face.
‘They should dream in their own world.’ Reginald snapped.

Author Bio:
E.L. Clarke’s early writing days were most productive when she was sitting on a train going to work. Writing in a cafe or on her lounge are top seconds, spurring her creativity, and are much preferred than writing in the wee pre-dawn hours which has become the norm for a busy mum and businesswoman trying to eke out time in the day for her craft.

A methodical and practical person who enjoys planning parts of her books in a spreadsheet, writing novels has taught E.L. to let go a bit. All inspiration for her books has come purely from her imagination. She feels that sometimes it’s as if someone else wrote her stories, saying, “I look back on my manuscripts at times and wonder Wow, where did THAT come from?”

E.L. believes that a great book is based on strong characters and a gripping storyline—something that is relatable enough to keep the reader interested but unique enough to allow the reader to escape. She hopes that her own stories provide her young readers a world to get temporarily lost in, to understand universal friendship, and that there could be so much more in the world than what is presented to us day to day.

When she isn’t writing thought-provoking fantasy and science fiction stories for young adults, E.L. manages a small photography business and enjoys singing, playing piano, camping, snowboarding, hiking, cooking, motorcycle riding, drawing and exploring the outdoors near Sydney, Australia where she lives with her husband, children, and their pets—a black Labrador, and a Maine Coon cat.

Verntropa: The Balance is her debut novel, the first volume in the Verntropa trilogy.