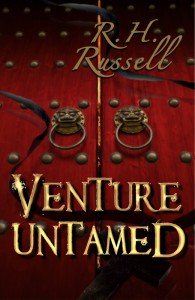 Venture Delving is a bonded servant, a member of the lowest class in the world. Already fatherless, when he loses his mother, he veers from energetic to out of control. But when Venture’s rage saves the life of Jade, his best friend and his master’s daughter, Venture finds himself in the last place he ever expected—a center renowned for training young boys to be professional fighters.

When Venture realizes he’s fallen in love with Jade, he knows that the only way he’ll ever have her, the only way he’ll ever be free to live the life he’s meant to live, is to defy convention, common sense, the trust of those he cares about most—and sometimes the law—and become the best fighter in the world, the Champion of All Richland. Venture must battle not only rival fighters, but the ghosts of his past and the members of a privileged warrior class who stand between him and his dream.

What Inspired You to Write Your Book?
I’ve been involved in combat sports since I was a teen and my experience with fighters of all sorts fueled this story. The world of fighters is really fascinating, and I wanted to share it with readers in a unique way—a way anyone could identify with, because I truly believe there’s a fighter in all of us.

About the Author:
R.H. Russell has had a head full of stories for as long as she can remember. She wrote her first book in kindergarten and has been hooked ever since. When she’s not writing, she’s coaching judo and traveling with the amazing, talented kids on her judo club’s National Team. She also writes the Unicorns of the Mist series as R.R. Russell.