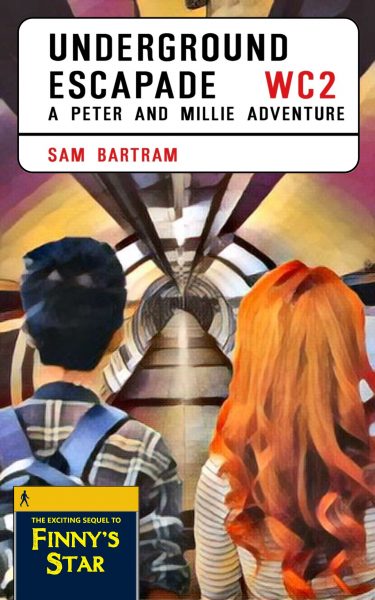 Peter and his best friend Millie are back together for another enthralling all-action adventure!

Eight months after the dramatic events on the Scottish Isle of Orsk, Peter and Millie travel to London to receive a special award from the Queen. As if that wasn’t exciting enough, Peter has qualified to compete in a National Athletics competition the following day. However, their already action-packed weekend takes a turn when they learn that an old adversary has escaped from prison. The dangerous criminal Derek Mooney has a score to settle and nothing to lose, but surely wouldn’t risk venturing to London to exact revenge on Peter and Millie? Would he?

Underground Escapade is the second Peter and Millie Adventure, following on from Sam Bartram’s popular debut novel Finny’s Star. It’s a high-octane thrill ride of a journey around (and below) one of the world’s most exciting cities that will leave you wanting more. Be prepared for twists, turns, excitement and danger, as the two friends have a weekend they’ll never forget!

What Inspired You to Write Your Book?
This is my second novel and also the second Peter and Millie Adventure. It was written during lockdown and provided some much needed escapism – as I hope it also will for it's readers.

Book Sample
“Somebody pinch me now!” I whispered, to nobody in particular. I immediately felt a sharp and painful pinch of my arm, just below the shoulder.

“Ouch!” I yelped, in a slightly more hushed tone than I would have done had I been literally anywhere else. “I sort of meant it figuratively! It wasn’t an open invitation for an act of grievous bodily harm!”

“Sorry, I guess I’m a pretty literal person,” Millie smiled back at me. “Anyway, that noise you made was pretty lame. You’re such a wee softy!”

Carrying my bruised arm (and ego) with me, we began the long walk down probably the longest corridor I had ever had the opportunity to walk down. I say corridor – grand hall is probably a much better description. Seemingly following us with their eyes us as we walked were portraits of various Kings and Queens of the United Kingdom in all their regal splendour, dating back as far as anyone cared to remember.

“I could get used to this!” Millie whispered to me as we walked along. “My first trip to London is going to take some beating. This isnae a bad place! Nae too shabby!”
I chuckled to myself. That was some understatement from Millie – we did in fact find ourselves in Buckingham Palace! Not too shabby indeed!

At this point, I should probably explain a little about who I am and what on earth my delightfully bonkers Scottish friend and I are doing at Buckingham Palace on a sunny Saturday in April. It’s only polite after all!

My name is Peter Lipscombe and I’m a rather scrawny, plain-looking, normal kind of a boy from rural Cambridgeshire. I’d love to make myself sound more interesting than that, but I feel I owe you the truth if I want you to come on this journey with me! Don’t get me wrong, scratch a little beneath the surface and I do have some redeeming qualities – my intelligence and undeniable athletic ability to name but a few! Even if I do say so myself!

Around ten months ago, my life changed forever when my best friend Finny sadly died. For a few months I felt bereft of purpose. I was totally inconsolable and refused to let the outside world in. However, a seemingly bizarre decision by my parents to take me on holiday to the ruggedly charming Scottish island of Orsk actually turned out to be a masterstroke, and slowly allowed me to see that I needed to start to live life again. Not just for me, but also for the life that my wonderful friend wasn’t able to have himself.

The single most important person in regaining my joie de vivre was unquestionably Millie. Ah, the incomparable Millie McCluskey! I had met her on holiday in Orsk. She took it upon herself to show me the beauty of her beloved island and had, perhaps unknowingly, also reaffirmed to me the beauty of living. It may sound a little clichéd but we are all so lucky to be here on this earth. It’s not always rainbows and butterflies but it’s a pretty special place and we have to make the most of every second we have here – I’m now certain of it. Millie is the personification of this attitude. Confident, funny, kind, ballsy and just occasionally a little crazy, but always living her life to the maximum. She became an incredible friend in a very short period of time, and since my trip to Scotland we had spoken regularly on the phone and via WhatsApp. Oh, and did I mention she also helped me to uncover a huge international smuggling operation? You know, that old chestnut! More on that later…

Anyway, that brings us back to why we happened to find ourselves at Buckingham Palace. We were both there to collect a prestigious George Medal for our efforts in uncovering the criminal activity taking place on the Isle of Orsk, and helping to bring those responsible to justice. Millie had never been to England before and her parents had decided to take the opportunity to turn the visit into a holiday, accompanying my family on a trip to London for the weekend before staying with us in Cambridgeshire for the rest of the week.

To add to the excitement of seeing Millie after so long and meeting the Queen, it was to be a bumper weekend for me, as I had also managed to qualify for an inter-county Athletics finals at Crystal Palace National Sports Centre the following day. I was slightly disappointed to have not made the Cambridgeshire Under 15 team in my best event, the 800 metres, but a welcome consolation was a place in the 400-metre relay team. What a weekend in prospect!

“Ahem, listen up ladies and gentleman,” boomed the voice of a very smartly dressed gentleman that greeted us at the end of the corridor. “Could Peter Lipscombe and Millie McCluskey please step forward?”

I looked across at Millie. She looked uncharacteristically nervous.

“Let’s do this,” I said to her, doing my best impression of sounding confident.

“Together,” Millie responded with a smile.

We both walked forward to a slightly bemused look from the suited gentleman.
“Good morning children,” the gentleman said. “Can I just double check that you are Peter Lipscombe and Millie McCluskey? It says on my piece of paper that you helped to locate and bring down an international smuggling operation…”

“Yes, that’s us,” I confirmed. The gentleman clearly didn’t think we looked capable of such a feat. I have to say, if I was him, I’d have been thinking exactly the same thing!

“Well, in that case – very well done indeed! Your country is proud of you! Now, follow me please,” the gentleman enthused.

We walked through a little wooden door and along a much smaller wood-panelled corridor until we came to a larger door at the far end. We stopped at the door and the gentleman turned to talk to us.

“Alright, try not to be nervous. You are both here today because you have done something incredible and everyone here wants to congratulate you for that, including Her Majesty. When you go through this door you will need to face the audience. There are crosses marked on the floor for you to stand on, and there will be others receiving awards also. Line up next to them. There should only be a few minutes to wait before Her Majesty arrives. She will work her way along the line and will talk briefly to each person before presenting their medal. You must address her initially as ‘Your Majesty’ and then after that as ‘Ma’am’. That’s ‘Ma’am’ rhyming with jam, not rhyming with arm. Is that all understood?”

“Yes, that’s fine,” I replied. I looked over at Millie who looked as white as a sheet. Her complexion was pale at the best of times, but at this moment looked almost ghost-like.

“I’m a wee bit nervous,” she managed to mutter. That was the understatement of the century! I was a little nervous but she did not look at all well.

“My nanny certainly isnae the Queen though,” was Millie’s response. I couldn’t really argue with that.

Just then the door opened and we were ushered through, taking up our positions by standing on the masking tape crosses on the floor. I looked out at the small crowd and could instantly pick out the faces of my mum and dad, beaming with pride. Dad offered a little wink of encouragement. My mum, not known for her subtlety, gave a huge double thumbs-up whilst grinning ear to ear like a Cheshire cat. So embarrassing! Mind you, it could have been worse. Millie’s parents were dressed head to toe in tartan! Her father’s outfit, complete with kilt, really was something to behold! At least they would be easy to spot if we got separated!

“Ladies and gentlemen, please be upstanding for Her Majesty, the Queen,” boomed another suited gentleman – and there she was! Queen Elizabeth II herself, looking resplendent in a bright yellow coat and hat. As she walked along the line of people, gradually making her way towards us, I once again checked on Millie. She was now shaking a lot!

“What’s the matter?” I whispered.

“I think I’m going to wee myself!” Millie replied rather too loudly, with a pained expression on her face.

“Your Majesty, this is Millie McCluskey of Orsk in Scotland, and Peter Lipscombe of Little Dunham in Cambridgeshire,” the suited gentleman said. “They are both receiving the George Medal for their part in helping uncover a significant smuggling operation in the Shetlands.”

“Very impressive,” responded the Queen. “How old are you both?”

“Your Majesty, we are both thirteen,” I answered. I was so impressed that I had even managed to speak.

The Queen looked at Millie. “I hear that you even managed to survive a plane crash. You must be a very resilient young lady. What was that like?”

Millie tried to speak. No words were coming out. Nothing at all. Time seemed to slow down at this point. Every second that went past seemed like an eternity. All I could think was ‘say something, anything, please!’ but no words left Millie’s mouth. Then finally Millie’s mouth opened. This was it.

“Jam!” Millie spluttered, and with that her whole body tensed up. A second later she slumped to the floor in a heap.

Author Bio:
Sam Bartram was born in Nottingham and lives in beautiful rural Norfolk, England, with his wife and two children. When he is not writing, Sam enjoys running, walking, singing, watching sport (particularly Norwich City FC), travelling, theatre, film and spending time with his friends and family.