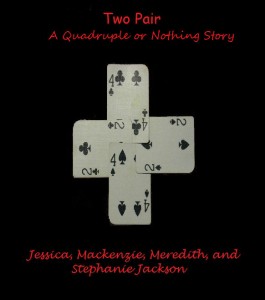 Reagan and Ronan Jacoby thought that their only problem was wondering if their cop father, Elijah would make it home from work every day. That is, when he wasn’t trying to keep them out of trouble. They didn’t think their father dating would complicate things even further.

Savannah and Mickayla Powers thought their only problem lied in the intense dislike they had of each other. They should be classified as fraternal twins rather than identical. The only thing they can agree on is that their mother, famous fashion designer Dallas, was acting strange.

The four girls’ lives are turned upside down when they realize that they have something in common, more than just their schools’ rivalry and their own problems. There’s a shocking secret that’s at play…do they have it in the cards to figure it out?

Targeted Age Group: 13 and up

Author Bio:
Jessica, Mackenzie, Meredith, and Stephanie Jackson are identical quadruplets who are current juniors in college. They live in Northern Virginia. Some of their biggest inspirations include their parents and their two older brothers.

What Inspired You to Write Your Book?
Moves, Music, other books, my friends, family, parents, day dreaming basically anything can inspire me to write. In fact, don’t think I’ve ever stopped writing since the fifth grade. But Anthony Horowitz, Denise Hunter, Michael Grant, and RL Stine are some of my favorite authors. -Jess

My life, mainly. People always say write what you know and so events that went on in my life are the biggest inspiration. Sometimes I get inspired by a quote, a song, or an experience a friend has gone through. Inspiration also comes from reading a lot of different books ranging from fantasy like J.K. Rowling’s Harry Potter to non-fiction collections such as Chicken Soup. -Mack

Lots of things inpsire me to write; it could be as simple as phrase someone said, or what I would like to see happen in a TV show or movie. Bu, it’s mainly my own life experiences and reading other author’s works, especially JK Rowling, Denise Hunter, Sarah Dessen, Michael Grant, RL Stine, Christopher Pike, James Paterson, and Tamora Pierce that inspire me to write. Being a quadruplet gives you a plethora of different scenarios to write about. With the authors I’ve listed, there’s a wide variety of fantasy, horror/thriller, and young adult fiction that’s always caught my attention and made me read the books over and over again. -Mere

A lot of things inspire me but I’d have to say dreams or simple phrases inspire me. It just has to be something that will instantly capture my interest. -Steph