You are here: Home / Children's Books / Children's - Mysteries & Detectives / Touchdown Tony Crowne and the Mystery of the Missing Cheerleader by Peter Guy George 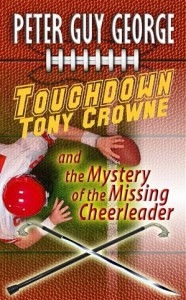 Tony Crowne is your normal, run-of-the-mill back-up quarterback and aspiring detective who has his share of troubles: He hates the nickname his father gave him, his eighty-pound dog clobbers his mother and grandfather at breakfast and he gets into a fight with the biggest kid in school.

Worst of all, his best friend, cheerleader Ashley Richardson, disappears the morning before Tony’s big football game. Did she run away? Was she kidnapped? Is she alive?

Now, Tony must help his team win the big game and help a retired police detective find Ashley before it’s too late.

What Inspired You to Write Your Book?
My inspiration was totally selfish. I wanted to write a book that I would read if I were magically nine or ten or eleven or twelve years old again.

How Did You Come up With Your Characters?
All of the characters were born out of a need for them from the story. Once I came up with the main character, all the remaining characters naturally spun off from him. A lot of trial and error, especially with names and tendencies, but I wouldn’t have it any other way.

Anthony Delano Crowne III rolled over in bed, looked up at his bedroom ceiling, let out a long, audible sigh and thought to himself, why does Dad keep calling me that name? I’m not a little kid anymore. I hate that name. I wish he would call me Tony!

Tony’s father, Anthony Delano Crowne Jr., had been calling his son “Ant” since Tony was a baby. When Tony was younger, he loved the nickname. He thought it was neat to be named after an insect, kinda like being called “Spiderman” or “Grasshopper” as in those old kung fu shows Grandpa enjoyed watching.

But not now, Tony thought. Darn it, I’m 10 and in the fifth grade. I need a manly name. “Ant” sounds like something you’d squish on the sidewalk without giving two thoughts about it. And I don’t wanna be squished!

He was also feeling a little down because Tommy Perry, one of his best friends in the neighborhood, moved away and they had done everything together over the summer. Now, he was gone and Tony felt a little empty inside.

Without really knowing it, Tony was also giving into the pressure he felt from the other kids at school, who were slowly starting to make more jokes about his name.

Like that new kid who just moved into the neighborhood, Judd Judson, who thought his name was funny when they were introduced to each other by Coach Tiny at pee wee football practice last night and sneered, “Hey Ant, whose yer uncle?”

All the players and even Coach Tiny laughed at Judd’s joke. Tony, however, clenched his fists and thought about tackling him, he thought about tackling him as hard as he could, but Judd stood at least five inches taller than Tony and a good forty pounds heavier. Tony, if anything, was smart and didn’t know how athletic Judd was just yet, so he let the joke pass, forced a half-hearted smile and said, “Good one.”

Tony yawned and his eyes began to droop, his breathing became a little slower as he muttered to himself, “I shoulda stood up to Judd. I coulda taken him down—”

“Ant! Ant! I’m coming up there in two seconds if you don’t get out of bed!”

Jolted awake by his Dad’s growly voice, Tony threw his covers off and leapt out of bed. He bounded across his room, opened his bedroom door and yelled, “I’m up, Dad! I’m up!”

As Tony absent-mindedly shut the door and sauntered over to his closet to pick out his school clothes, he knew better than to make his Dad get him out of bed. Anthony Crowne Jr. had been a high school and college wrestling champion and he had not gained more than five pounds since his last match. Whenever Tony fun wrestled with his Dad, he thought it was like wrasslin’ with Superman, the man of steel, and he had never come close to beating him.

But, it was too late. The door flew open with a bang and Tony’s father jetted into the bedroom, roaring like a starving lion. In one deft move, he threaded his right arm between Tony’s legs, wrapped his left arm around his chest and swooshed him above his head all the while pirouetting like a deranged ballerina.

“Are you positive you’re getting up?” Anthony quizzed Tony.

Tony, though, was spinning around like a helicopter blade and what he actually heard was, “Are you—whoosh— positive —whoosh— you’re —whoosh, whoosh— getting up?”

Tony couldn’t contain himself any longer. He laughed and screamed at the same time, just like when he rides the rollercoaster and it’s going down the first big drop. He was having the time of his life.

All the commotion in Tony’s room wafted down to the ears of a large mass of fur dozing on his back in the living room. One eye popped open, quickly followed by the other one. A full sniff with his snout told Curly the Airedale all he needed to know. He sensed excitement, action and best of all fun! In one fluid move, Curly wriggled off his back and broke into a full run. He bound up the stairs, two and three at a time stopping momentarily at the top of the stairs to check where he should run to next. In a split second, he was off again in a full dog gallop gaining speed as he raced down the hallway towards Tony’s bedroom; woofing happily all the way.

Curly, mentally gauging the distance he would need to reach his target in the least of amount of time, leapt into the air as soon as he entered the bedroom. Tony, seeing the familiar black and tan body hurtling towards the two of them, had only enough time to shout, “Dad! It’s Curly—”

Anthony Jr., caught off guard by the surprise attack, took the full wallop of Curly’s eighty pounds in the small of his back, emitted a loud grunt and lunged towards Tony’s bed in hopes of making a soft landing.

At the same time, he protectively brought Tony down, cradled him next to his chest, twirled in mid-air and landed on Tony’s old bed with his full weight.

Tony’s bed had once been Anthony Jr.’s and originally had been Anthony Sr.’s bed, but no more. As soon as Anthony Jr. and Tony thumped onto the bed a sharp, wooden crack echoed out. Tony, still being cradled in his Dad’s chest, looked up at him just as Anthony Jr. looked down at Tony. At the same time and in a slightly conspiratorial tone, they uttered, “Uh-oh, Mom’s gonna be ma-a-a-d!”

Anthony Jr. always looked on the bright side of life and this situation was no different. “Hey Ant, you know what? This bed hasn’t collapsed yet. I bet that crack we heard was just a slight break in the frame. I’m thinking, if we move real slowly and carefully off of here, that I’ll be able to repair the bed frame lickety-split.”

Tony looked up and down at the bed and said, “You think so Dad? I don’t know; that was a pretty loud crack we heard.”

And right now, the most fun thing in the world to Curly was to be with his family who were lying on the bed. With a slight wag of his upturned tail and panting heavily as his tongue hung out the side of his mouth, Curly turned and trotted towards the bedroom door as if intending to leave the room. But as soon as he reached the door, Curly woofed twice, spun around and dashed towards Tony and Anthony Jr., leaping into the air as high as he could.

As Curly made a four-paw landing upon Tony and Anthony Jr., the bed frame groaned again and another, deeper, louder crack issued forth like a gunshot. At the same time, the bed frame broke completely in two and all three of them bounced, not once, but twice as the mattress hit the floor and rebounded them into the air like a backyard trampoline. Tony and Anthony Jr. roared with laughter as Curly stood on top of both of them, licking one face and then the other, his tail wagging furiously in delight.

There was that book in the fourth grade he wasn’t particularly fond of…oh, yes and that other book in the fifth grade wasn’t that great…hmm, not to mention that really crummy book in the sixth grade…but he liked all the rest of them.

Ah, okay, that’s probably stretching the truth as well, but that’s what a writer does.

In any event, Peter hangs out somewhere in the lower 48 states and loves to read and write about sports, mysteries and adventures.

He mainly writes books that appeal to the kid in all of us.