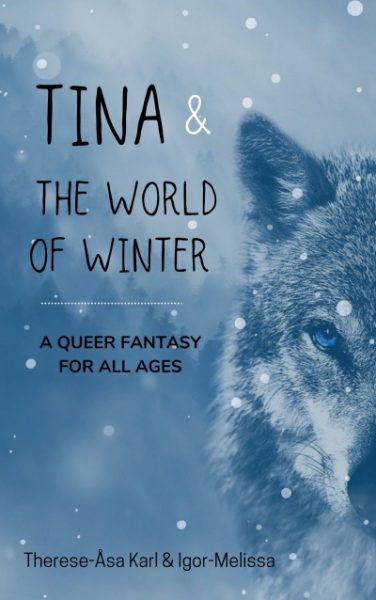 When Tina falls into the World of Winter she meets a chatting squirrel, a wise Bear, and a chilly cat being who seems to hold on to a secret. They all seem to believe that Tina is destined to overthrow the Queen of Winter, the reign that holds their world in an ice grip. Now she must find a way to unlock her magic, before it’s too late.

“I’ve listened to this story many times, Ratatosk the squirrel is so funny”/ Leah, 8 years.

“This is a lovely story for adults as well, I love listening to it”/Diana, parent

What Inspired You to Write Your Book?
We wanted to write a story that we’d have wanted to hear as kids. With characters that we, as queers, could identify ourselves with and most importantly, weren’t shown as an outsider or a problem but as a normal character. Because seeing yourself in a story is a powerful experience and one that is sadly lacking for many queer kids (and adults!)

Book Sample
Tina was on her hands and knees in the snow. Her head was spinning, and she had to steady herself on the ground. What just happened? Where was she?
A high-pitched voice chanted nearby, “You came! You came!”
Tina tried to turn her head in the direction of the sound, but the world started to spin and she had to look down again. Why was she in the snow? How had she come here? The last she remembered she’d been walking in the forest on a summer’s afternoon.
The shrill voice chanted again,”You came! You came! I didn’t fall from the tree! You came!”
She tried to lift her head in the direction of the voice again, and this time the world remained still. On a branch, not far from her, was a squirrel, dancing and jumping in the snow.
”I didn’t fall from a tree! And I didn’t eat Old Bear’s mushrooms! The signs were right! I’m not crazy! You came! You came! You are our savior!”
Tina closed her eyes and shook her head. A talking, chanting squirrel..? Had she fallen from a tree and this was all just a dream? Where was she? And what was this forest? She opened her eyes again. Everything still looked the same. She was in a forest. In the snow. She looked up at the branch and yes… There was a squirrel dancing there…
”Come with me! Come with me!,” it said.
Tina looked away, ignoring it. This could not be real. It had to be a dream. She would not acknowledge an incoherent, chanting squirrel dancing on a branch. That would be to go too far. It had to be a bad dream.
She stood up and looked around. She was in a forest but she didn’t recognize it at all. It didn’t have the friendliness of her grandparents’ forest, but a sinister feel to it. You don’t go wandering around in this forest by yourself, she thought.
”You need to come! Hurry! They will find you here! Come, follow me!”. The high-pitched voice of the squirrel pierced the air again.
She shivered. What would she do? The sun was going down and she would die if she just stayed here. Her summer dress was whipping in the wind and she had already lost sensation in her toes.
“Hurry! Hurry! They will come!”
She didn’t know who “they” were, but she didn’t want to stay alone in this forest. Maybe following a talking squirrel was a better option?
”To where?”, she said, her body shaking from the cold.
“To our friends!”
And that was it. She couldn’t go back now, could she? She had just replied to a talking, chanting squirrel. She must be losing her mind. She looked around. The forest was getting darker as the sun went down. The squirrel was already on its way into the forest, and with a sigh, she followed.

Author Bio:
Igor-Melissa and Therese-Åsa Karl are a non-binary, autistic couple writing fiction for the LGBTQA and neuro-divergent family and allies. Considering themselves storytellers, rather than authors, their books center around love and queer relationships, no matter if it’s a fantasy, sci-fi, or thriller. When not occupied with one of their stories you’ll find them reading manga, watching anime, or doing something else equally geeky.