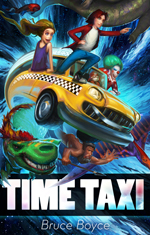 Bored suburban twins are taken on the adventure of their lives by a comic shape-shifting superhuman from the remote future who drives them down a wormhole to the beginning of life and then guides them through the wonderland of their own evolution.
The series premier ends when the twins, hitching a ride in their remote cavemen ancestors, tame the first puppy – a fateful event that Boyce captures in the phrase “dog made man”.
Features 21 full color illustrations

What Inspired You to Write Your Book?
Time Taxi popped into my head on the banks of a muddy river on the northern edge of the Great Karroo desert in my native South Africa while I was watching the vividly colored bird life in the reeds and thinking of a piece of family history my mother told me.
Back in 1920 Robert Broom, the man who would go on to being one of the world’s most famous paleontologists, was her family doctor with a practice in the tiny village of Douglas right across the river from her dad’s farm. So when her sister, then about 4 years old, was bitten by a dog and developed septicemia, Dr Broom was called. This was of course long before antibiotics so there was nothing Broom, for all his genius with the old bones he dug up in the desert, could do to help. Nevertheless, every single day for the week she remained alive, he crossed the river on the pontoon right at the spot where I was standing to do the best he could.
In my mind’s eye I could see him, as always dressed in a heavy formal black suit in spite of the 100 degree heat, driving his horse and buggy across the river. Then it came to me. The river was the river of time, Dr Broom was transformed into a shape-shifting superhuman from the distant future and the buggy he was driving was a Time Taxi!

How Did You Come up With Your Characters?
Once I had the basic conception, as described above, I needed the books other main characters who had of course to be kids going on this incredible adventure up their family tree. I wanted both boys and girls to be represented so I chose twins who had plenty of sibling rivalry going to give the story spice. It’s hard to conceive of a being infinitely more advanced than oneself so I made the taxi driver a mysterious character who was both cosmic clown and all-knowing superhuman. His passion for shape shifting seemed the best way to capture his mysteriousness.

Book Sample
Jack didn’t answer so Jill asked again. “What’s weird?”
“This message. It says we’ve won some kind of tour.”
“Spam,” said Jill who was texting someone in Korea . Without even looking up she said, “Just delete it.”
“But it’s got both our names on it.”
Jill sent her text message and got up with a sigh. “Let’s see.”
There was a picture of a taxi on Jack’s screen which had its rear end in the present but was all stretched so it had its front in the age of the dinosaurs.
The bubble on its roof said “Timeless.” Under the picture it said: “Hi Jack and Jill Hill! Are you ready for the time of your life? Your taxi is waiting.”
“Some kind of spam for sure,” said Jack. “Or a lame joke.”
“But how did they get both our names?” Jill asked.
“Hackers,” said Jack, “or one of our friends trying to be weird.”
“Doesn’t seem that weird,” said Jack. “More like funny and interesting. I like the dinosaurs.”
A horn honked in the street. It sounded like it was just outside their front gate.
Jack looked out the window “What the -” he said. There was a yellow taxi parked right outside. It honked again.
“This is very weird,” said Jill.

Author Bio:
Bruce Boyce is the pen name of the author of a popular book on the evolution of human behavior which has been translated into five languages and an award-winning book set in the time of the Roman emperor Nero.
He has been fascinated by evolution since he saw his first dinosaur drawing and was told by his father, who was a science teacher, that our great-great (and lots more greats) grandfathers and grandmothers actually lived among real dinosaurs.
Boyce was casting around for a way to tell the story of human evolution to kids when Time Taxi driven by a wise-cracking time tour guide from the distant future honked its way into his life.
Born in South Africa, where he graduated from Rhodes University, he now lives in Southern California. This is his first book for children.
He can be contacted at: timetaxikids@gmail.com