You are here: Home / Teen - Young Adult / YA - Science Fiction & Fantasy / The Visitor’s Choice: A Search to Make Things Right by Alexander Davidson 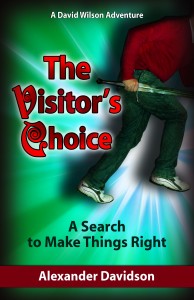 Being dumped at a stranger’s house for the summer wasn’t the worst thing to happen to high school student and reluctant reader David Wilson. Waking up in a mysterious place isn’t a treat either.

Inside Mr. Linden’s library, David discovers a book that allows him to travel back and forth to the medieval world of Ethelrod, a land that is not particularly welcome to visitors. On his first visit, David is forced to fight in a traditional contest and wins, in turn making a choice that will change Ethelrod’s future dramatically. When he visits Ethelrod for a second time with his new friend Hannah, ten years have passed, and David’s previous actions have brought the kingdom to the brink of a civil war. Yet, when David accidentally leaves Hannah behind in Ethelrod, the real pressure starts. It is now up to him to rescue Hannah and to bring peace to Ethelrod by putting everything back the way it was. What David doesn’t imagine is that Ethelrod holds the key to his past, as well as his future.

David is a resourceful guy who knows how to take care of himself, but will he be able to find the strength to take responsibility for his decisions and make things right? Will he really be able to survive all alone? Alexander Davidson’s first novel is an action-packed young adult adventure that teaches readers about choices and consequences, taking responsibility to help others, and the power of reading.

What Inspired You to Write Your Book?
When I graduated from college, I realized that I stopped writing short stories like I used to. One summer day, I decided I would start writing and not stop until my story was complete. It took all day, but I did it. Inspired by a picture of a book with vines coming out of it, The Visitor’s Choice sprouted from there. After that original short story, I kept having ideas for sequels (What next? And then?) until I decided to put them all together as one novel.

How Did You Come up With Your Characters?
I mostly used my imagination for my characters, but I will confess that the main character is named David because my last name is Davidson. Some names, like Paul, are taken from people I know (Paul was my high school buddy and college roommate), but the characters do not reflect their namesakes.

Book Sample
David couldn’t handle it anymore. “It’s all too hard. Too difficult. I can’t. I won’t.”
“Do you only do things that are easy? Do you give up when things don’t go your way?” Morgana questioned.
David wasn’t sure why, but he thought about the books in school he never even started. He knew they would be a challenge, so he never even opened them. He just pretended to read them instead. What was wrong with taking shortcuts if it meant he wouldn’t look like an idiot in class? He did what he knew he’d be good at and therefore never failed.
“So?” David replied.
“Just because something is tough or difficult, it doesn’t mean that it isn’t possible. The challenge is what makes something wonderful when you finally overcome your obstacles. The sense of success that comes when working hard over time is much better than achieving a simple task. Don’t be afraid of a challenge when it can make you a better person in the end.”

Author Bio:
Alexander Davidson is an author, secondary educator, and certified reading specialist with a BA from the University of Michigan (Ann Arbor, MI) and an MAT in Literacy Education from Madonna University (Livonia, MI). He has been a member of the National Council of Teachers of English since 2011 and has presented at the National Conference for Peer Tutoring in Writing (2009) and the Michigan Reading Association Annual Conference (2014). While teaching reading and writing to middle school and high school students, Alexander Davidson strives to create written works that will interest his students and teach them valuable lessons at the same. The Visitor’s Choice: A Search to Make Things Right (Ferne Press) is his first novel.

Alexander Davidson is a 26-year-old high school English teacher, but that is not everything there is to know about him. He is a book nerd and movie buff. If he could go anywhere in the world (real or imaginary) it would be Hogwarts, or Portland. He is a rock climbing enthusiast enthusiast (He likes people who rock climb). He is also an aspiring Academy Awards host, but no one has told the Academy of Motion Picture Arts and Sciences just yet.