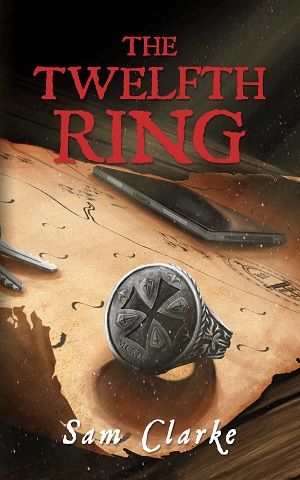 “A very well written story full of adventure, humour, wit, and action. It would definitely deserve to be made into a movie.”

Fifteen-year-old Noah is shipped off to the Bahamas to spend time with a man he barely knows: his biological father Magnus.

His mother had always depicted Magnus as a penniless drifter so Noah is surprised to discover that he runs an archaeological consultancy from an amazing yacht equipped with military-grade security. Desperate to forge a bond with his father, Noah asks to be included in the consultancy’s next assignment – the search for a mysterious medieval ring.

Together with young uni drop-out Viggo and unrequited crush Isabelle, he follows the ring’s trail from Mexico to Sicily. But someone else is after it. Someone who will stop at nothing to lay his hands on it.

As Noah faces danger after danger to delve into the ring’s mystery, he discovers the truth about his father. And it’s a revelation that will change his life forever.

PRAISE FOR THE TWELFTH RING

“A great suspense mystery drama played out in the Bahamas. A cross between a Dirk Pitt and Indiana Jones adventure.”

“A seamless blend of adventure and comedy. Yet it is gripping you at every twist.”

“Great read. Compelling story, adventurous and fun! Looking forward to the next one.”

Targeted Age Group:: 11 and above

What Inspired You to Write Your Book?
I love adventure, historical mysteries, unlikely heroes, and novels that bring a smile (or a chuckle) to the reader's face. The Twelfth Ring is a fun read perfect for fans of Indiana Jones and Uncharted. Those who appreciate the excitement of Anthony Horowitz’s Alex Rider series as well as endearing awkwardness of Tom Holland’s Spiderman will enjoy this book.

Book Sample
The black cab was outside our house. Much to the driver’s joy, the metre was running and we were late. Mum had forced me to wear my smart suit because I had to make a good impression on a bunch of virtual strangers: the flight crew, the custom officials and my biological father. For a change, instead of algebra, I was battling a tie with a mind of its own. I had been booked on a special programme for minors travelling alone, which felt a lot like a prison transfer. I would be handed over to the British Airways crew in Heathrow airport and they would release me into my father’s care once we got to Nassau. Like a prisoner, I had no choice in the matter.

Author Bio:
Sam Clarke is addicted to rock music, coffee, and Japanese manga. Her gardening skills are abysmal and she is rumoured to have killed a potted cactus. She currently lives in London next to a very noisy bar. Her first book, The Twelfth Ring, is a Page Turner Awards finalist and a BBNYA semi-finalist. Her second book, The Templar Sword (also a Page Turner Awards finalist) will be out in 2022.