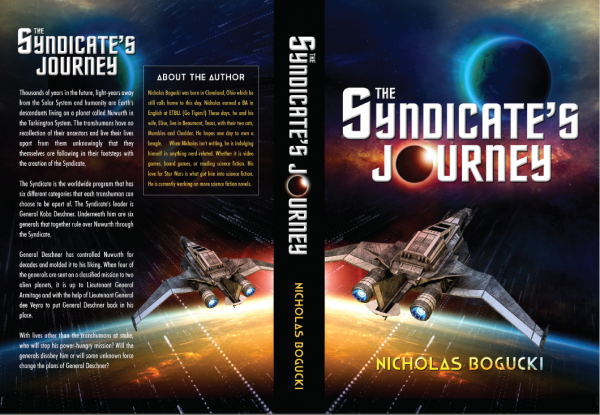 Thousands of years in the future, light-years away from the Solar System and humanity are Earth’s descendants which are called transhumans. They are living on a planet called Nuwurth in the Tarkington System.

The transhumans are apart of a worldwide government program called the Syndicate where six generals are in charge of the entire world.

When four of the Major Generals are sent on a classified mission, things go awry.

With lives at stake it is up to the Lieutenant Generals to intercede before it is too late. Will they be successful in stopping the Generals plan? Or will the Major General’s blood be on their hands?

What Inspired You to Write Your Book?
For years I had many stories and ideas on paper, but it wasn't until a few years ago that my love for science fiction and writing combined into one. I wanted to write a science fiction story that I could share with others.

Author Bio:
Nicholas is a nerd at heart. His love for science fiction began at an early age, and since then he has fallen in love with the genre even more. His favorite science fiction movie is the Star Wars trilogy. (The original trilogy, which is arguably the best.)

When Nicholas isn't writing, he is hanging out with his wife and their two cats. He could be camping in the woods, though!