You are here: Home / Children's Books / Children's - Science, Nature & How It Works / The Stardust Mystery by PETER SOLOMON 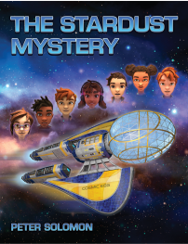 The Stardust Mystery illustrated book with companion video games, YouTube science videos, and online student projects were produced with funding from the National Science Foundation. These transmedia resources present the wonderful science story of stardust as entertainment and education for curious young minds.
The book follows the adventures of cousins Lizzy, Milo, VC and Neddy as they unravel the Stardust Mystery and tell the story. Their adventures take them across time during the evolution of the Universe and the history of Planet Earth in the Cosmic Egg time, space, and size-change travel ship. They must find out what stardust is (atoms) and how, when and where it was created (in the explosive death of stars shortly after the Big Bang and continuing to today). They must figure out how everyone alive is made of the same stardust that was once in the body of Albert Einstein and the Last T-Rex. They find out that this is actually true. We each have more than 300 trillion carbon atoms that once belonged to, and were exhaled by Einstein, and more than 5,000 trillion that were once in each T-Rex.
As the Cosmic Kids team, the cousins enter The Science and The Future Contest, held by the mysterious Dr. Q. The winners will be taken on a trip around the moon! What could be a better gift for the Grandpa they love, a former NASA astronaut? Grandpa is their team’s coach for the contest.
Along the way, they visit Einstein, dinosaurs, and even the Big Bang. To win, they’ll have to use their brains to answer the many science questions, but they’ll also have to use their hearts to come together to solve the problems of family.

The Mystery is presented in a poem:
“I was born in a place that is far, far away.
At a time long ago, but I am now here to stay.
Albert Einstein’s body was once my home.
I am now part of you, but I could always roam.
Some call me Stardust because of my history.
It will all be clear when you solve the mystery.
Who am I, and what is my story?
Write me a rhyme to tell of my glory.
The science of stardust is presented as the Cosmic Kids team use their brains to discover it. What they learn is about atoms, a wonderful science story for late elementary and middle school students. It is the story of the kinds of atoms, their sizes, their numbers, and their arrangements. It is the story of how atoms were created during the evolution of the universe, and how they have been shared among plants and animals during the history of planet Earth. The story is told by the Cosmic Kids as they discover these facts. The book is filled with Grandpa’s extra information about the science concepts. Scientific terms presented throughout the story are linked to more complete explanations and definitions at the end of the book.
Here is what one science teacher and mother said about the book on GoodReads.
ALLIE RATED THE BOOK 5 OUT OF 5 STARS – IT WAS AMAZING
This book was great! I have discussed this with my students, and we are reading it together. They are loving the information presented in a fun and relatable way. They love seeing the different families that work together to complete a common goal. I love that it uses scientific concepts and principles that we are learning in the classroom. The authors do a great job of presenting the information in ways that provide the students with the content knowledge they need. As a middle school teacher, this is a great resource for my STEM classroom. We are currently working on the project portion that is provided for teachers. My students are enjoying the website and all that it entails. As a Science teacher, I recommend this book for all science teachers! As a parent, my own children are enjoying the story and learning things they have not learned in school yet! Allie is a Middle School Teacher and a Goodreads Book Reviewer.

What Inspired You to Write Your Book?
As a physicist with a long career, I loved discovering and writing about science to communicate my discoveries to my colleagues. When my twelfth grandchild was born, I decided to write books to communicate the wonderful stories of science to children. My idea was to weave the science into exciting fictional adventures that would be fun as well as educational. The history of stardust is one of those wonderful science stories. The characters in my stories are based on the personalities and interests of my grandchildren. Milo really did have a sneaker collection, and Lizzy really knows how to do the double flying kick in martial arts. They are now in college, still competing with each other for the best grades.

Author Bio:
Peter Solomon is a scientist, author and entrepreneur who is devoted to passing on his love for the many wonderful science stories to the younger generation through the media they like best. He believes that integrating science concepts into exciting stories is the best way for children to learn. The birth of his twelfth grandchild was the inspiration for The STARDUST MYSTERY book. The child characters in the story explore the creation of their atoms through time and space travel adventures in the Beamer Virtual World. Solomon was asked by his young book reviewers to create a virtual world that they could use. This inspired a National Science Foundation project to create video games and the Stardust Mystery YouTube channel for science videos to accompany the book. The characters in the story, games and videos were inspired by his grandchildren.