You are here: Home / Free and Bargain Books / Bargain Books Under $3 / The Protectors – Book 2 – The Land of Neo by JoHannah Reardon 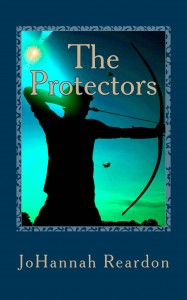 Caden and Amicus are two ordinary boys who spend their days racing and practicing their archery. But changes are coming to their peaceful village in the Land of Neo—not the least of which is a young girl named Ella who is staying with Sequor, the wise old bear that dwells just outside their village home.

Soon after Ella arrives, strange things begin to happen. Creatures they’ve never seen before, both good and bad, begin filtering into their realm. And it’s up to Caden and Amicus to protect their village and to make sure that Ella can complete her mission. Will they be able to hold off the evil that threatens everyone they know and love?

This is book two in the Land of Neo series.

He hadn’t gone far when he met a little man about a foot tall whose braided white beard reached his knees and contrasted with his bright red hair, round nose, and purple eyes. Caden was particularly fond of the little men who were yet another example of Neo’s wide variety of amazing creatures.
“Hello, Mika. How are you today?” Caden asked cheerfully. Seeing Mika always made Caden feel happy. The man had that effect on almost everyone.
“I’m fine, young Caden. And you?”
Caden smiled. “I’m fine too. Where are you headed?”
“I’m gathering firewood farther out today.”
“Want some help?”
Mika smiled and nodded. Caden knew his help would make it quick work for Mika. Gathering firewood was just a matter of picking up sticks for Caden.
As they worked companionably together, Mika asked, “Have you heard about the new bear in the woods?”
Caden looked up in surprise. “There’s a new bear? There’s never been any bear here except Sequor. The rest are all up in the mountains.”
“Not anymore. At least one has come down and is taking up residence on the other side of the forest.”
“Why?”
“I’ve no idea, young Caden,” Mika replied as he picked up another stick that was a small log to him.
“Is he like Sequor?”
“Well, he’s a bear . . . ,” Mika responded with a grin.
Caden grinned back. “I mean, is he wise and good?”
“Let’s hope so,” Mika answered.

How is Writing In Your Genre Different from Others?
Fairy tales and fantasy allow you to address the truly important themes of life such as courage, temptation, integrity, and perseverance. Trying to talk about those in a contemporary novel just sounds preachy, but in a fairy tale it’s a natural part of the story.

What Advice Would You Give Aspiring Writers?
Keep writing and get advice from an expert. Don’t be afraid of criticism. It will make you a much better writer if you take it to heart.

Author Bio:
JoHannah Reardon has been a writer/editor for over 20 years. She has written 11 books of many different genres. The Land of Neo series is her children’s favorite.

What Inspired You to Write Your Book?
I’ve loved fairy tales as long as I can remember, so I wrote the Land of Neo series for my children – and for all children everywhere!