You are here: Home / Children's Books / Children's - Pre-school / The Monsters Who Were Afraid Of Children by Piso Mojado 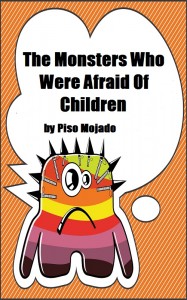 This ebook is intended to soothe the anxieties of children who are afraid of the dark, and has been a very popular story in every ebookstore in which it has been placed. The greatest fear of monsters in this book is children. They also fear darkness and any food that isn’t green. Unfortunately, a monster family becomes lost and, in order to escape the impending darkness, decides to hide in a human home. There they are discovered by a young child who calls for the help of his older sister and the two of them confront the salt-shaker-sized monsters. However, as the monster family members plead their case, they become more and more sympathetic to the young children.

Author Bio:
I was inspired by very strong family members with a common sense core morality. I decided to be a “Boy Scout” at a very young age, and this ambition taught me a lot more about human nature than a rebellious stance would have. By not shutting out any segment of my country’s citizens, I could understand not only what was fair and just, but also what was subtle and clever. I am not judgmental; I express my preferences in the positive, rather than the negative. I made a lot of mistakes as I was maturing; I would not rob others of that privileged knowledge.

What Inspired You to Write Your Book?
Although my niece and nephew were not afraid of the dark as they were growing up, they had a humorous protective older sister / clueless younger brother relationship that served as the initial impetus for this story.