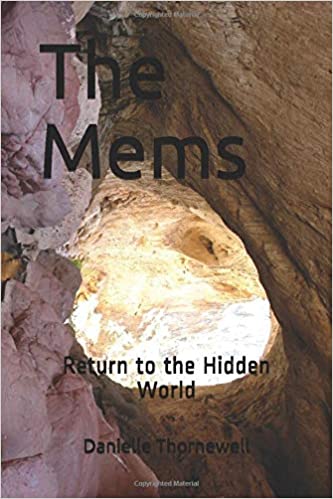 The Mems are back in trouble again. They have called on our favorite characters to return and help them fight against the Drones. This time though there are new characters coming to help out. This book has many twists and turns that will keep you interested until the very end. Will they defeat the Drones again and save the Mems? These are the questions that you, the reader, will have to find out in this new book!

This is part 2 of the book “The Mems” which is also available on Amazon.

What Inspired You to Write Your Book?
My teachers in school inspired me to write. I started writing my first book while in school when my teachers had us do writing projects. I took those ideas and formed them into a book. That book was part one of the series "The Mems". I finished that book and took a very long break from writing that ultimately turned into years. I finally got my urge to write again when I finally graduated from College and my children were grown. My college professors taught me how to be an even better writer and how to express myself to the reader more confidently. This new found inspiration helped me write part two of my story "The Mems: Return to the Hidden World".

Book Sample
Life is sometimes so funny. It takes so many twists and turns. I remember like it was yesterday the first time I met Nermal and the Mems. Boy did I have a hard time trying to explain that one to my parents. I was punished for an eternity. I finally just told them that I had lain down on the ground to watch the clouds, (which was not a lie) and I fell asleep. (For a long time, I tried to convince myself that it all was really a dream and that I had just slept though the whole episode.) When I woke up it was already dark out and I got lost in the woods trying to find my way out. I gave all the credit to Patrick for finally finding me in the woods and leading me out to the safety of Sergeant Clumer. I figured this explanation was alot easier for them to believe then what really happened to Patrick and me. Patrick really shocked me when he went along with my entire story! I felt bad about lying to my parents and I know they taught me that it was wrong to lie but there was not any easier way to explain it to them. Maybe a couple of years down the road when I am older, they will believe me when I explain it to them and not just think that I have a very overactive imagination.
I really thought the whole ordeal was over with and that I would never see Nermal or the Mems again. I know Nermal had said otherwise when I left him the last time, but I guess Nermal knew the Master better than I did. I think even when I left the first time that Nermal had known that he would need to call on me again.
It was not even a year later when Nermal finally called on me again. My house had finally settled down from the first episode. My Mom and Dad did not even mention the incident anymore. They always let me know they were carefully watching me though. I could not even walk to my friend’s house without reporting to them the instant I walked though the door. The forest where I got lost was off limits indefinitely. Patrick and I were forbidden to go anywhere near our favorite rock. I really missed that one place over the last year. I must admit I had to sneak there just one last time to see if I could find the place where I entered the cave. I was amazed that I could not even find one trace of the entrance to the cave. It had completely disappeared.
Even though I could not go back to the forest again Nermal still found a way to get the message to me that he needed my help again. I think that just that one journey to the Mem’s world connected me and Nermal together – forever. I was really shocked when one night he just suddenly appeared right in the middle of my dream. The dream did not even have anything to do with the Mem’s! If I remember correctly it was something about school that I was dreaming about. I was having a test the next morning and I was nervous. I had studied hard and tried to memorize everything I had to know. Geography and History were never subjects that I was particularly good in and the test that I was studying for included a little of both. You can imagine how nervous I was! I was dreaming that I was sitting in class and we were just starting to take the test, the only thing I had filled out was my name and date. I got to question one and realized that I had no idea what the answer was! I tried not to panic, but as I scanned the next question and the next and the next, I did not even know one single question on the test! Where did these questions come from? I was sure that they were not in the chapters that I had studied.

Author Bio:
I, Danielle Thornewell, was born on July 7, 1975 to Kenneth and Virginia Reed. My family also consists of two sisters Toni and Lynnette. I have been married for over 22 years to a wonderful man named Robert and have two children, Alexis, and Adam.

I continue to reside in Hammonton, NJ