You are here: Home / Free and Bargain Books / Kindle Unlimited eBooks / The Ingenious, and the Colour of Life by J.Y. Sam 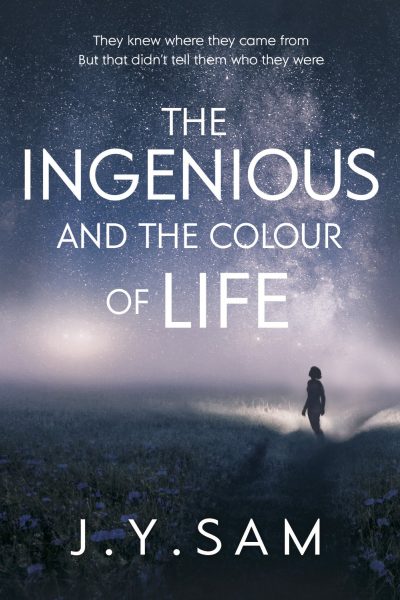 A different kind of young superhero. Not out to save the world, just themselves.

Seven children born with genius genes – instead of being celebrated as outstanding products of biotechnology, they are abandoned and forgotten. When one of them mysteriously disappears, it brings out of hiding the geneticist who created them, Professor Harald Wolff. Now blind, broken, and a recluse.

When forced to confront an unknown enemy, the full potential of their genius is unlocked. But exceptional as they are, they must learn the dangers of being too clever for their own good, and that they are just one small strand in the complex web of life.

No ordinary tale of good vs evil, this story warns of the evil that lurks inside us all, and our struggle to triumph over it with good. And so the Ingenious children must combine their unique gifts to combat the evil within – resulting in an epic battle of the world’s greatest minds.

What Inspired You to Write Your Book?
I wanted to create superheroes that were more like us – very human, with weaknesses, insecurities, and flaws. And instead of saving the world with physical force, they needed to save themselves in a way that needed great strength of emotion, character, and willpower.

Book Sample
His dreams dredged up a litany of forgotten memories that sparkled with crystal clarity. They flickered in his mind, as his eyelids twitched, and his head thrashed from side to side.

And here, seeping into his dreams came the memory of a river walk, not long ago. Sneakered feet crunching in the gravel beside silvered water that lapped and winked in the moonlight. There was a backdrop of silhouetted angular roofs, etched against a velvet sky. But as Tai walked under an old bridge that arched above him, his feet kicked into something soft but heavy on the ground. And he froze. He looked down, but was unable to see through the shadows pooling around his vision like black blood – yet Tai already knew what lay at his feet. It was a man, sprawled on the ground, near-dead. He quickly stooped down and felt with his hands: a head of short, unkempt hair, the smooth skin and bristly chin of a young man, and slumped, narrow shoulders.

Suddenly, the man grabbed him, and Tai jumped.
But then he heard a long, low exhalation. Felt his muscles spasm then relax for the last time.

Tai dropped his head, and held the man’s hand; at least he didn’t have to die alone. And in the moment that skin touched skin, Tai began to understand the man’s arid, desert-like grief – from losing the love of his life. It left him so barren, so dry, that he couldn’t bear to go on. Tai closed his eyes. And it surprised him to see a blue-grey image of the man’s last fading memory: the upper corner of a woman’s face, a deep-set eye with silky eyelashes, a high cheekbone, and a spray of flowing hair. The blue of the fleeting image intensified into a burst – just as the man’s grief exploded into both wretchedness and oblivion. Tai’s mind sizzled with a bright flash of the man’s thoughts and emotions, memories and sensations – they flared out like a million sparks of a firework, eventually fizzling and fading into nothingness.

Tai stumbled back, and sat, stunned, on the ground next to the dead man. There was an acrid bitterness in his mouth, and he spat it out into the river. It was as if he had tasted death itself, and it sickened him.

Author Bio:
Sadly, the characters in J.Y. Sam's books are far more interesting than she is! She's married, has a beautiful if somewhat crazy daughter, a thoroughly sensible son, and a rather… shall we say, 'unique' Italian husband. She lives a quiet life working at home, surrounded by her cat, Phoebe, her duck, Rosie, four java finches, and a shoal of rapidly multiplying tank fish. Worryingly, she chats much more with her animals (they don't answer back) than with her family…

It took around five years to write her first book 'The Ingenious', and now that it's published, she's hoping that the gestation period for books 2 and 3 in the trilogy will be much shorter! Otherwise, she and her one fan will probably die of old age… And she cannot, and must not, leave an incomplete trilogy – or the universe will almost certainly implode. So watch this space…