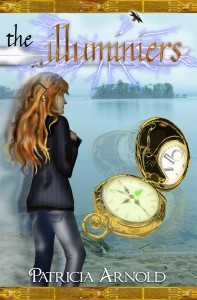 There are essentially two stories in this book that combine into one. First, some background and the story of Amberly Wakeland, who moved into a haunted house and found herself caught in the web of a sinister illuminier. The second story is about Morgan Fey Burne who would rather be referred to as Morgan Achron. She follows her own path and with some mysterious objects, she finds Elderwynne’s Academy. Eventually, Amberly’s and Morgan’s paths collide and their lives are drastically changed.

Magic is a series of commands upon the energy flowing through a force known as the Framework. While wizards and witches can recite the ancient commands to summon power, Illuminiers can amplify it.

The one with the Synergium has limitless power. Markus Burne, an evil Illuminier, seeks the destruction of Elderwynne’s Academy to absorb the Synergium. The betrayal begins with an ancient entity and a deceitful girl with violet hair. Amberly and her mother are new to Locke Lake, and when they move into the notoriously haunted home of Connor Locke, they are easy targets. With promises of salvation, Markus steals the evil from Amberly’s home for a darker purpose.

He disappears with the forbidden magic, leaving destruction in his wake. He leaves his daughter, Morgan behind…

The daughter he traded for supremacy isn’t an easy target.

Morgan Fay Achron has the power of three and the gift of time.
She’s a descendant of Morgan Le Fay with a timepiece, a coin, and a book of nonsensical poetry. Miserable with a stepmother that doesn’t want her, she mourns for the father that vanished.

Then Arthur Achron arrives. Convincing her to come to Locke Lake, she leaves the only home she’s ever known to seek answers. At H.B. Locke Private School, Morgan spies another student leaving the cafeteria; a girl with purple hair.

Morgan discovers another school far out on the isthmus. With ingenuity and a white lie, she surprises the Illuminiers. They find her dishonesty unwelcome, distrusting her nearly as much as the one person who tried to destroy them. Despite having a lineage that dates back to Merlin and King Arthur, Morgan has to fight to gain the trust of the Illuminiers to use the Framework.

Morgan’s friends are there to help her find herself. When the time comes, will Morgan betray the Illuminiers as Markus would have it? Will she stand with her friends against a dark adversary? Swept up in the Synergium, can she resist the lure of the Framework?

This novel features the chronicles of two girls, Amberly and Morgan and how their paths connect.

Recommended for ages 11+, but a great read for all ages!

How is Writing In Your Genre Different from Others?
We went beyond wizards and witches to create an even more select group who have certain abilities to not just perform magic. This book incorporates mythical creatures like unicorns in a way that isn’t traditional. There are also other creatures like tree squeaks and treatures. The book has magical objects that behave in unexpected ways. The story also examines the characters family relationships and addresses how the characters handle topics such as divorce. However, these themes don’t overwhelm the story, and the heroines are strong and capable, but not perfect. Plenty of adventure is included and the characters have moments of great fun as they discover the perks of attending Elderwynne’s Academy.

What Advice Would You Give Aspiring Writers?
I would advise aspiring writers to begin writing whatever muse they have. Even if writer’s block, busy schedules or disinterest hits, these story ideas need to be saved so that the tale can be picked up again when inspiration hits. Another tip I would offer is to make sure you create a chronological outline of events and try to stick to it. When you begin writing, you will usually discover how and when the story ends. If the story doesn’t end, plan for a series or continue. When beginning, capitalize on the talents of those you know. For example, my daughters assist me with illustrations and even offer advice. If you are writing for a certain age group, then don’t be afraid to let them see what you have so far. They may have some amazing pointers!

Author Bio:
Patricia Arnold began as an artist who loved to write. She was born in Owosso, Michigan and grew up in Bancroft, Michigan. Her vivid imagination and abilities as an author, graphic designer and artist allow her to work in more than one genre. She received her Master’s Degree in Information Assurance from Davenport University and holds degrees in marketing & graphics, graphic communications and business.

What Inspired You to Write Your Book?
About the book…
I had trouble selecting a genre for this book beyond Fiction/Fantasy. On one hand, this book is a good contemporary reading selection for anyone who likes mythical creatures; some invented, some from legends. In addition, anyone who likes magic may like it as well. One thing is for sure, my 12 year old daughter Lisa Arnold has tested it and approved it 100%. She also helped create some of the gray scale illustrations inside of the book. I’ve ordered print copies, and she can’t wait to receive one!