You are here: Home / Free and Bargain Books / Bargain Books Under $3 / The House in Windward Leaves by Katherine L. Holmes @klouholmes 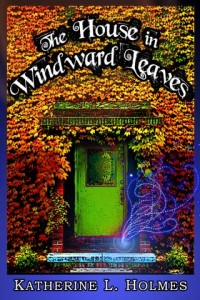 Costumes make the child in this fantasy about identity.

Halloween night, the wayward Sadie leads her friends past cardboard cut-outs of the painter Mistral and a lady at the leaf-covered house on Windward Road. A wall mural transports them to an enchanted star where their costumes become real.

As Fortuneteller, Sadie only has to look in her crystal ball to help the others with their transformations. Her friend Candy is the Homecoming Queen and her brother has turned into a zebra. The neighbor boy has become George Washington and his brother is a musician in the star band.

That begins the adventures of Sadie and the enchanted children who make up the bizarre star community. Then Mistral’s woman friend finds that her star-of-sapphire necklace is missing. After the gangster Riff Raff is accused, he displays a map and riddles for a treasure hunt. The winner must locate the Tooth Fairy, pass by a weredog, and follow directions to an invisible unicorn to be granted a boon from Enchanter Mistral. But other wishes have to be discovered.

Book Excerpt
After he pulled the bell string outside the tent, he sounded a herald of his arrival.
“Come in,” he heard a low, distracted voice. The Trumpeter entered on feet that felt as prickly as if they’d gone to sleep on him.
The Fortuneteller was intent on discovering her own fortune. “Shhhh,” she hushed him. “Wait behind the curtain.” Then she drew the bead curtain so she could finish her own consultation. For the first time, the fog stopped blowing from her fortune in the crystal ball. But what she saw disturbed her.
There was a girl who looked sad in the crystal ball, a girl with a face like hers. She wore boring, schoolgirl clothes. Then the name Sadie Waskowsky floated to the brim of the crystal ball, its letters connected like a hanging. She decided not to tell anyone, only perhaps Mistral, about the girl, the name, and the house behind her.
These pictures bothered her so much that she shook the crystal ball in anger and until she only saw herself, the Fortuneteller, in it. More detail wasn’t available. “I’m happy as I am,” she thought, pushing the sad-faced girl from her mind.
“Alright! I’m ready now,” her voice wound to the Trumpeter.
He opened the curtains and there she was – through the burning incense. The Trumpeter sneezed and took another look, entranced. The Fortuneteller was like a genie come out of a bottle, dark-eyed in her gleaming jewelry. He felt awkward when, on the stage, his mouth had all the coolness of music. But that was all he was really sure of on Mistral’s star.
Off-stage, the Trumpeter found that he was shy and couldn’t think of anything bright or brassy to say. During his breaks, he felt like answering other people with notes from his trumpet. Instead, he would say something like, “The moon’s rays are balmy tonight.”
Balmy seemed like a sophisticated, off-hand word. But then that didn’t work when he talked to anybody more than once. For one thing, there weren’t many changes in the weather on the star. And for another thing, he had stolen the word balmy from the violinist’s comments. He couldn’t think of any other way to describe the moon’s rays.
Now he stood staring at the Fortuneteller. And she stared back at him with an annoyed look in her dark blue eyes. They shone like the shaded lamp.
“You were going to tell our fortunes, remember?” he finally sputtered out. He talked as if he was blowing his trumpet!
“Your fortune.” the Fortuneteller said. “As I told you before, I don’t tell anyone my fortune.”
“The moon’s rays are balmy tonight.”
“You said something like that the last time I saw you. You’ll say something like that the next time I see you. Oh well, come over here to this table and sit down.” The Fortuneteller was already bored.
After he fell into a chair, the Trumpeter just sat staring at the girl he couldn’t place.

How is Writing In Your Genre Different from Others?
Children’s fantasy is a genre where the imagination can take off, however fantasy needs a stable atmosphere as a base. So I took time to figure out the the workings of the fantasy. In other genres, the setting and plot aren’t usually so far from the world we live in.

What Advice Would You Give Aspiring Writers?
Allow yourself to write your story and in your way. Later on, you’ll want to be hard on yourself, to hold the story away from you, so that you can edit it for submission.

Author Bio:
Katherine L. Holmes lives in Duluth, Minnesota, where she does does much of her writing in the winter. She also works with used books. Her first published book, The House in Windward Leaves, became a Finalist in the 2013 Next Generation Indie Book Awards and in the NIEA awards. In 2013, The Wide Awake Loons was published by Silver Knight Publishing and The Swan Bonnet was published by Enigma Press. She also has a collection of short stories published by Hollywood Books International, Curiosity Killed the Sphinx and Other Stories.

What Inspired You to Write Your Book?
I’ve always loved Halloween parties though I struggled with my costume idea before one. The phrase “Clothes make the man” also gave me an idea for the plot of this fantasy.