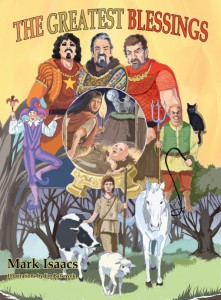 Fame, Fortune or Power: Which would YOU choose if you could have only one?

Lords and brothers Fame, Fortune and Power decide how well all people will fare in life in the namesake realms of human desire they control. When they deem a woeful babe abandoned in a barn unworthy of any of their favours, the child grows up the lackey of a cruel farmer and his tormenting spoiled children. When he is old enough Boy, for that is the name used for him, runs away with the only friends he has ever known–the equally abused and unnamed Sheep, Cow and Horse–to seek a better life.

Years later, a quarrel among Fame, Fortune and Power over whose blessing is the greatest sends them, and their court jester Nobody, on a quest to find an unsullied party to settle their dispute. Boy seems the perfect candidate, but his unconventional views on what is valuable in life incite the lords and bring him to the brink of doom. Will he live? What happens to the lords? And is Boy right or does one of the lords’ blessings outshine the others? The future of mankind depends on the answer.

What Inspired You to Write Your Book?
the timeless tales of Aesop and Hans Christian Andersen

How Did You Come up With Your Characters?
The Greatest Blessings addresses the fixation of young people today with bling, celebrity and sway at the expense of family, friendship and brotherhood, so I came up with the characters of the Lords Fame, Fortune and Power as allegorical representations of the vanity and ultimate emptiness of those paper chases. I imagined the character of a forsaken runaway named Boy to express that theme, by way of his loyal companions Sheep, Cow and Horse. I added a court jester named Nobody for comic relief.

Book Sample
THERE ONCE THRIVED in a magnificent palace in a fabulous paradise
three glorious lords upon whom the success of all people rested. The
names of the lords, who were also brothers, were Fame, Fortune and
Power, and they alone dispensed those earthly desires named after
them that mankind coveted above all others. They did so on the first
birthday of a babe, when the child who is the parent of the adult
begins to take shape. At that time, they would gaze into their large
crystal ball and dole out a measure of the human longings they
commanded to the tot, according to how much he or she pleased
them. If, for instance, the babe tickled one of the brothers pink, the
lord would chant a magical incantation that bestowed a future of
great fame, fortune or power upon the tot. If two brothers were thus
smitten, greatness in two of those three realms lay ahead. Rare but
not unheard of was the babe who won the hearts of all three brothers,
for that little one would enjoy a life of towering glory, wealth and
dominance that none but a select few among mankind ever know.

Author Bio:
Hurrah! Huzzah! And Hip Hip Hooray! After many years in journalism, PR and education, I finally found my passion in short story writing. I’ve had a number of shorts published in literary magazines and now Lampglow Books is publishing one of my favorites, The Greatest Blessings, as a children’s chapter book, replete with 22 sumptuous illustrations. That’s a victory in itself. But what would be better is if my students are right and the tale of the fabulous Lords Fame, Fortune and Power and the forsaken runaway named Boy they command to decide which of their namesake favours is the greatest blessing becomes the “bomb” they say it will be!