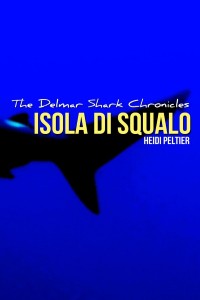 On the small Mediterranean island of Isola di Squalo, an ancient legend binds the fate of the royal Delmar family directly to the peace and protection of the island. The consequence of turmoil is the return of a giant shark who ultimately attacks one of the royal family.
Seventeen-year-old American, Dylan Murphy is thrilled to learn that a life-long dream has been fulfilled when he is accepted to a local university’s shark study program on Isola di Squalo. He has hopes of diving, in particular, with the Great White shark, and learning from one of the leading scientists in the field. Unfortunately, an early run-in with the island’s princess, Terra Delmar, lands him with the unsavory task of befriending her and convincing her to allow the scientists to stay.
​Dylan scoffs at the Delmar legend until he comes face to face with the shark. When a life-threatening injury sends him home, he realizes he has fallen in love with the island and its new queen, Terra. The return of the shark can only mean that she and her island are in danger, and though he knows he and Terra can never be together, he feels he needs to return to save them both.

What Inspired You to Write Your Book?
A lot of things came together to make this book. The basic story line came from my own personal alternate ending to a series I had read that I felt ended badly. Once I had it written, I realized I could make something completely my own out of it. So I combined it with my love of the beach and of sharks, and it grew into, what I think is, a great story.

The boat was already in motion and headed back to the harbor. Karen told me that the sonar had picked up absolutely nothing all day, but just as she finished her sentence, a huge blip showed up on the screen. We couldn’t tell how big, but this was no fish, and it was moving fast, right toward us.
Just then I heard Fedder yell out, “Murph, I’ll race you to the dock!” Then, a splash.

I raced from the sonar room out onto the deck. Terra and Delphine were leaning over the rail to watch Fedder swim in, both of them were laughing. Nobody knew what Karen and I had just seen. I climbed the ladder to the highest point I could get to on the boat. I scanned the water from there, looking in the direction I knew the blip had been. Terra and Delphine were watching me now, along with most everyone else on the boat. I couldn’t say anything, not yet.
“Karen!” I yelled, I knew she would hear me.
“A hundred and fifty meters, and closing fast,” she yelled back as she was running to the wheelhouse.
Still scanning, I was squinting past the sun’s glare on the water. Then, there he was. Stealthy thing, coming out of that glare. He was just a couple of feet below the surface by then and headed straight toward the docks, straight toward Fedder.
I nearly jumped down from my perch onto the deck, my only thought being that Terra and Delphine were about to watch their brother be attacked by a shark, their own personal nightmare. I sprinted to the back of the boat, Terra calling to me in a worried voice as I passed her. No time. I dove into the water, unzipped wetsuit and all. I flew through the water. No race had ever been this urgent, no competitor as formidable. Fedder was his target, and he had not changed course. The only other thing in the water was me. Should I go for hydrodynamics and speed to beat the shark to Fedder? And then what would I do? Or should I begin flailing and slapping the water to draw its attention to me? And then what? I heard screaming coming from behind me. The people on the boat must have finally spotted the shark. I decided to go for speed. I gave it all I had, everything in me began to burn, my skin tingled. I was beginning to feel like I was choking, my fingers and toes were going numb. Adrenaline, it had to be adrenaline. Finally, finally, he was there. Fedder was right in front of me. I grabbed his foot with my right hand mid-stroke and pulled as hard as I could. With my left hand I grabbed his arm as it reached back to push me off and pulled him to my left. I was looking at him the whole time, so I didn’t see the open mouth that must have been right next to me. I felt a force on my side that felt like I had been hit by a Mack truck. My body folded around the shark’s head, and I slammed into Fedder. I couldn’t breathe. Then, everything went black.

About the Author:
I am what they call a “jack of all trades but a master of none.” I write, draw, paint, cook, bake, photograph, video edit, and craft. My most important job though is being a wife to my wonderful husband of thirteen years, Chris, and being a mom to our two precious boys, Ethan and Rory. Between driving my “should-have-been-a-yellow-school-bus” minivan to take kids to school, pick them up, take them to various practices, and watching soccer and baseball games, taking zumba classes, rehearsing with my church handbell choir, and doing my own recreational reading, I don’t have a lot of time to write. But when I do, I enjoy it, and you can be sure I give it all I’ve got. I hope to continue it and to have an audience ready for more.