You are here: Home / Free and Bargain Books / Bargain Books Under $3 / The Crumbling Brick – Book 1 – The Land of Neo by JoHannah Reardon 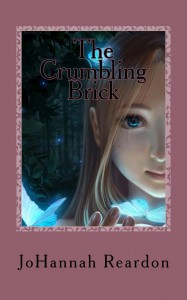 As Ella keeps a promise to her mother to clean the cellar, she discovers a crumbling brick behind an old trunk. Even though it’s raining outside, sunlight pours through the opening. Intrigued, she chips away at the brick to find the source of the light.

To her astonishment, she finds another land beyond her cellar wall, gripped in the freshness of spring. But soon she realizes this lovely place is threatened by evil. Can Ella save this beautiful kingdom from disaster?

This book is written in the tradition of C. S. Lewis’sand George MacDonald’s fairy tales.

What Inspired You to Write Your Book?
My children loved the C. S. Lewis and George MacDonald fairy tales, so I decided to write something similar for them. They loved this first attempt, so I decided to continue the series. The second book, The Protectors, is now available too.

About the Author:
JoHannah Reardon has been an writer/editor for over 20 years. She has written 11 books in numerous genres. She also has worked with and known many children!