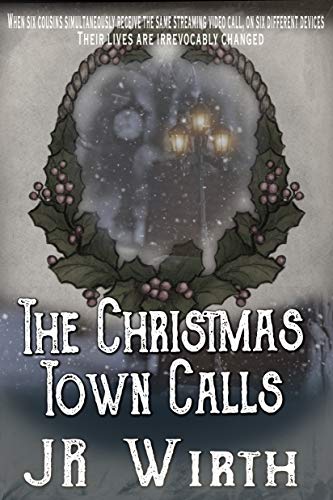 It’s been a few years since there was any strange Christmas occurrences in the lives of Hailey and her cousins—and times were a changin’. Each member of the Christmas brigade had fallen in love with technology. From video games—played with online friends, to video chats with friends from school, to hours of YouTube watching, the cousins were hooked. Each had grown and matured as well. Isaiah had made the biggest jump, going from college student to full-time employee to help support his new family. Suddenly the brigade had grown from six to eight with the addition of their newborn, nephew—Nathan, and his mother—Karina. It was never an issue, however, as they fit right in.
Despite their individual developmental changes, and their new love of all things technological, the Christmas brigade never lost its hope for a new Christmas adventure. But it seemed like the Christmas magic that they had come to love and expect, particularly the little ones, had all but gone away. The cousins continued their annual ritual of assembling the town beneath their grandfather’s Christmas tree, and then donning the tree with decorations of love. And Harper continued to abscond with the baby Jesus and the manger, when the season was over, keeping it safely tucked away in her chest of drawers, waiting to be placed back under the tree when the timing was right.
Sensing it was time for a change, their grandfather decided to buy a new tree and to donate the aging tree that had been the symbol of the magic of Christmas. The cousins knew that this was no ordinary tree, which was proven when it refused to be given away. Each time the donations were picked up, the tree ended up safely back in the garage, yet no one knew how.
But on that fateful Thanksgiving afternoon, all that was about to change. Shortly after completing the annual ritual, while enjoying the decorations, fire, and Christmas music, the impossible happened. In a heartbeat, all the screens of their devices switched to a streaming connection with the townsfolk who were connecting electronically.
From there things got real sticky. Some of the brigade got transported to the town beneath the tree, while the baby Jesus got transported to their grandfather’s garage. Hailey, Isaiah, and Harper are left to figure out how to get the others back—and what the heck do they do with the now living, and breathing, baby Jesus.

Targeted Age Group:: 11 and up

What Inspired You to Write Your Book?
My granddaughter — who is the heroine of the stories.

Book Sample
Remember when I said that nothing had happened for a few years? Well, that’s not exactly true. I don’t know if it quite lands in the category of magical, but it certainly was freaky. After last Christmas, Grandpa felt that the tree had reached its lifespan. He decided to get a new tree and donate the magical tree. I don’t think he ever suspected that the tree and its town were supernatural in their make-up, but you can never really tell with Grandpa.
Anyway, Grandpa put the tree in the garage next to some things that were set to go to donation organizations. He then got on the Internet and looked for good deals on after-Christmas, Christmas tree sales. He ordered one and a few days later, we received a rather small box with the new tree. Grandpa saw the box and just laughed. He realized that what he thought was a tree that stood over eighty inches tall, was just a small tree that was measured in centimeters. He was determined to get a new sparkling tree, but he waited until just after Halloween to order the latest replacement. The box was again small but promised a six-foot tree with lights.

Author Bio:
J.R. Wirth is an award-winning author and native of Southern California. Raised in Azusa, he now hails from San Bernardino. J.R. is recognized for his extensive work in the helping field. He is a licensed psychotherapist with a long list of accomplishments, including a 15-year stretch as a domestic violence counselor and trainer, and head of a disaster response team. J.R. had a stint as a university professor, and even spent time as a child abuse investigator. Through all these duties, he continues to provide clinical supervision to young, aspiring therapists. J.R. currently supervises the therapy portion of a forensic psychiatric unit in Southern California. Above all, he is a spiritual man who is dedicated to his children, which often comes out in his writings.
Besides traditional publishing, J.R. has several pieces published—including a poem and several short stories in online venues. In all his works, J.R. combines ordinary people with extraordinary circumstances, to create characters that jump off the page and straight into the readers’ heart and psyche. He remains dedicated to the craft of writing, highlighting the conflict, frailty, and hero in all of us.