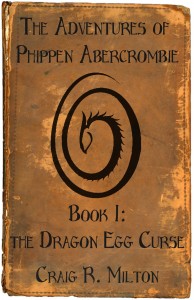 Phippen Abercrombie is a collector of adventures and he keeps his collection in sealed jars in his pantry. The timeless and mysterious Professor Abercrombie stores countless jars in his enchanted pantry each containing the unique past, present or future adventure of thousands of children.

Fourteen year old Cameron Tate is preparing to make the best of the last couple days of summer holidays before returning to school. A bookish, imaginative, loner, Cameron is dreading returning to school where he struggles to fit in. When he reluctantly goes on an errand for his mother he soon finds himself following a talking weasel through the woods near his home to the mansion of Professor Phippen Abercrombie.

The Professor presents Cameron with the opportunity to enter the pantry and seek out the jar labeled with his name, containing his adventure. Cameron retrieves his jar and twists the top off releasing a magical journey beyond anything he could ever have dreamed.

In an instant he is transported to the cursed kingdom of Krotan. Accompanied by three young farmers, the King Aodhan, his brave knight Brogan and the knights warrior daughter Phaelan, Cameron must confront the evil witch Dagma Kaillech and the vengeful dragon Tiarnach. If Cameron is to defeat the Witch, save the Princess and bring to an end the curse that has plagued Krotan, he must trust in his new friends and find the courage in himself to stand up for what he believes is right.

Filled with monsters, magic, acts of great heroism and sacrifice; The Dragon Egg Curse is a fantasy adventure for the young and the young at heart.

Author Bio:
My name is Craig Milton, I am a 42 year old Architectural technologist from Kelowna, British Columbia, Canada. I have four school age children who share my love of fairy tales. I wrote this novel as a bedtime story for them.
This is my first novel. I studied English, and creative writing in university before going into Architecture. I have no professional experience writing but I have enjoyed writing stories ever since I was a child.
The Adventures of Phippen Abercrombie, Book I: the Dragon Egg Curse is my first novel. I believe my target audience would be middle school to early young-adult readers. This story is the first in a proposed series using the pantry and the collection of sealed jars, as the framework for each unique story. My idea is that each book will use Phippen Abercrombie and his collection to set the children on their adventures but the books can have completely a different subject matter, settings, time or place.
It took me many years to write and I have really enjoyed the process. It was hard work but my kids love it and that is who it is really for. And writing a novel is a really rewarding feeling. Something you cannot describe to someone who has never done it.
I hope anyone who reads it enjoys it half as much as I enjoyed writing it.

What Inspired You to Write Your Book?
I have had the desire to write a fantasy/fairy tale ever since I was a child and discovered Narnia. I had the basic idea for this story floating around in my head while I attended university in the early 90’s. then one day while driving with my family across the Saskatchewan plains i saw sign for two roads, Phippen and Abercrombie. I thought of the first sentence and I couldn’t get it out of my head.

I started writing the novel for my children and would read it to them as a bedtime story. I have four children and their ages range from 8 to 14 so they are the perfect ages for my target audience.

They love fantasy and fairy tales as much as I do so I write for them as much as for myself.