You are here: Home / Children's Books / Children's - Fantasy / The Adventures of Jimmy Crikey: The Emerald Lake by Wallace Briggs 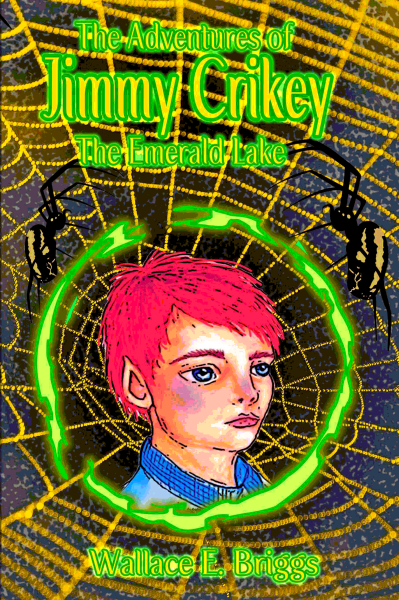 Fourth stand-alone story in the series ‘The Adventures of Jimmy Crikey’ the orphan who decided to make his home on Earth. Among his friends are the four witch guardians of Earth’s realms and Lord Oron, The Weatherman.
The Emerald Lake, home of the Aquamites, is invaded by flesh-eating, fire-breathing serpents. Chief Witch Matilda asks for Jimmy’s assistance. He accompanies Elwinn, witch guardian of everything associated with water, and visits the Emerald Lake. They arrive at a plan to catch the serpents in a spider’s web net
The serpents are lured into a volcano’s lake where Jimmy traps the reptiles in a Golden Orb spiders’web net, to drag the creatures into the cold depths of space.
Jimmy’s new friend, Annison, is fatally injured when one serpent takes a bite from her tail. She is dying from the loss of blood. The witches cannot help and there is no time to get her to Attalia for advanced surgery.
All appears lost until Lord Oron reveals that he is one of the Lords who serve the Master. He could save Annison, but he will not bring a subject back to life from the dead. Lord Oron persuades the Master to save the life of Jimmy’s first love.

Targeted Age Group:: MG to YA

What Inspired You to Write Your Book?
Jimmy Crikey was born during a beachside summer holiday in Great Yarmouth on the English East coast. My then four-year-old son and his newfound friends sought shelter in our beach tent during a shower of rain. Pat implored me to entertain (keep quiet) the exuberant boys, so the story of Jimmy, the red-headed bullied boy was created on the hoof. Over the following afternoons of brief showers, Jimmy's adventures expanded to meet their demands. It would be many years later before they appeared in print.
One reviewer wrote: A wonderfully feisty mystical adventure, reminiscent of a traditional fairy tale but with a scientific twist, … offers a wonderful mix of reverie, extending and bending realism with fantastical ideas. A great introduction to the fantasy genre, 'The Emerald Lake' is magnificent in its ideas and imaginative in its execution, building an exciting multi-dimensional story of magic and mayhem. Absorbing and totally entrancing,

Author Bio:
Wallace Briggs (1943 – present). happily married to Pat for over 50 years, who he first met when they were both aged eleven walking a common route home from different schools.
His formative years were experienced in and around Durham, never living more than 5ml distance from the Cathedral. Married in 1964, Pat and he spent many happy years in the North East of England before employment almost took them off to emigrate to Jo'berg, South Africa. But plans were changed in the final weeks, and instead, the company moved the family, which by then included two sons, to Sussex.
After more than twenty years in Sussex, then Hampshire, employment was again responsible for moving to beautiful rural Lancashire, where they still reside. Now retired from a long career in sales and marketing of technical products in the UK and international markets Wallace spends his time caring for his disabled wife, decorating and firing scenes onto china plates, playing a Hammond electronic organ and writing, whenever possible.
After many years of seeking a publisher for my first children's story, "The Magical Adventures of Jimmy Crikey", it was self-published on Amazon.