You are here: Home / Children's Books / Children's - History / That’s How It Was: Operation Finders Keepers by Hazel Pacheco 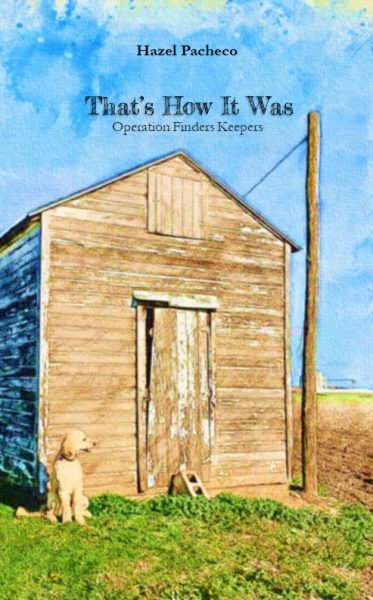 That’s How It Was: Operation Finders Keepers comes under “interesting children’s fiction” category. This is a unique children’s book because it is primarily done in letter format. Set in the late 1960s, the letters are to Randy Ray’s future family. His ten-year-old self shares his perspective on people, animals, and faith as he contemplates whimsical and not-so-whimsical career choices. The story begins with Randy Ray’s daughters’ searching their grandmother’s trunk for their father’s “ME” book. Who would have guessed that a class assignment would lead to captured moments in time waiting to be discovered by his daughters thirty-seven years later! His letters allow his daughters, Sarah and Melissa, to get to know the boy who became their father, and understand the essence of what it means to grow up country. That’s How It Was: Operation Finders Keepers is a multigenerational story of past meets present. Playfully illustrated, it is a funny, light, easy-to-read, nostalgic look at growing up on an American mid-west farm.

What Inspired You to Write Your Book?
Many people wonder . . . what does a part Hispanic, part Native American woman, who has lived her entire life in New Mexico, know about growing up on a farm in the predominantly German and Scandinavian mid-west? Simply put . . . I married into it.
Back in the day when I was dating, I had a dear friend tell me if I found someone who had a happy childhood, he'd be a good catch. I didn't give it much thought at the time, but it may have been a premonition on her part. I hit the jackpot! It turns out the love of my life had a wonderful, happy childhood growing up on a farm in the country. I lived a sheltered childhood with no bold, exciting stories I can recall. But over the years I've listened to my husband and his cousin talk about their mischievous escapades. It inspired me.
Some of my fondest memories while raising our two daughters were visiting the library and reading bedtime stories. It made me think "someday I'll write a children's book." After twenty-seven years of Federal service, someday finally came. That’s how it was!

Book Sample
"I am free to roam the earth as far as my legs or my bicycle will take me, and as long as I'm on time for supper, life couldn't be better." –Randy Ray

Author Bio:
After retiring with twenty-seven years of federal service, Hazel Pacheco finally found time to write That’s How It Was. The book is a tribute to the love of her life, her husband of twenty-nine years. Family is important to her. She has a large extended family, two daughters, one son-in-law, and a “grandpuppy” named Thor. When she’s not spending time with family, you can find her writing, reading, creating art, or exercising. Since her home is in New Mexico, you won’t find her taking long walks along the beach, but she does have plenty of sandy paths to walk in her native Land of Enchantment.