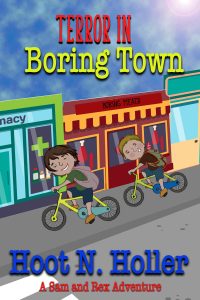 BE CAREFUL WHAT YOU WISH FOR…THAT WISH JUST MIGHT BLOW UP IN YOUR FACE!

Twelve-year-old best friends, Sam and Rex live in a boring town and dream of an exciting adventure for their summer break.

But when two mysterious strangers visit their town for the summer, the boys suspect something isn’t right. Sam and Rex are convinced the men are up to no good. Why would anyone ever want to stay in their boring town on purpose? What are these men really up to?

When the boys uncover the strangers’ evil plot and accuse them of being criminals, no one believes them. Sam and Rex draft a plan to prove their suspicions and uncover their dangerous plot. It involves risking lives. But will it work? Will the boys be able to stop the wicked men in time? And whose lives will they be risking to expose the criminals?

Fans of the Hardy Boys, will enjoy this mystery-solving story of friendship.

What Inspired You to Write Your Book?
My son inspired me to write this one. He wasn't much interested in books as a child, and it was difficult to find stories that would captivate him. I wanted to write a mystery, similar to the Hardy Boys mysteries. I read them, along with Nancy Drew and a series called Trixie Belden as a child and I loved them. I hoped to capture the intrigue, adventure, and fun I experienced reading them.

How Did You Come up With Your Characters?
Sam, the main character lives in a boring town, even the name is Boring. Sam is a boy who longs for adventure but doesn't have much faith it will ever come to his town. Why would it? His town is in the middle of nowhere, with nothing to do. Rex, on the other hand has a wild imagination and sees adventure at every turn: spies at the General Store hopping off bikes during a stop for a drink on their ride through town and criminals invading Boring. What a shock they both get when terror does come to town!

Author Bio:
Hoot N. Holler is a daughters/mother writers/illustrator team. Hoot, the funny one spends her free time scribbling green and purple ink all over Holler’s words. N., the illustrator, is completely immersed in Tamriel. Holler is aptly named; especially during a UMD game.

Links to Purchase eBooks
Link To Buy Terror in Boring Town: A Sam and Rex Adventure On Amazon