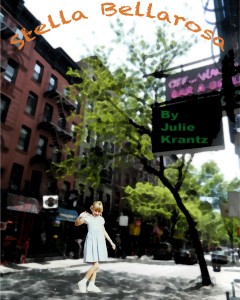 A wallet, a thief, and a brilliant plan–what can possibly go wrong?

At least that’s what Stella thinks when she urges Pin Pin to return the stolen wallet—until she gets caught with the goods, that is, and all heaven, hell and whatever’s-in-between breaks loose, forcing the BFFs to hit the road.

Tag along with Stella and Pin Pin as they ditch Little Italy for midtown Manhattan, all the while battling archrival Angie Como for the title to SOHO’s Annual Food Drive, their ticket to Regis Academy—a posh high school for girls, hidden far, far away in the Catskills. Oh-la-la, for the chance to leave home—for good!

Problem is… the road isn’t much safer than home, especially when the runaways attract the attention of police, museum officials and—worst of all—Stella’s unforgiving father. Also pitted against their extravagant dreams is the threat of Pin and her family’s deportation, including baby sister, Audrey, who lies at the heart of this quirky coming-of-age novel—STELLA BELLAROSA, a serious MG with a funny-bone.

Author Bio:
Julie Krantz always wanted to be a writer and often describes herself as “one of those kids who headed to the library for a good time.” A lifelong book lover, she published her first article in the Riverton, NJ newspaper in eighth grade. Now a full-time poet, picture book writer and novelist, her work can be found in the SCBWI National Bulletin, the Chapel Hill News and Charlotte Viewpoint as well as various online forums.

Julie’s first picture book, TACHI’S GIFT, appeared in the September 2007 issue of SPIDER Magazine as a story entitled, “Yoshi’s Yucca.” This same story received a Letter of Merit from the SCBWI Magazine Merit Award Committee in 2008. Julie also won a 2006 Emerging Artists Grant from the Durham Arts Council, a First Place in Children’s Writing from Carteret Writers, Inc. in 2002, and an Honorable Mention from the Society of Southwestern Authors in the early ’90’s. A graduate of Douglass College and Rutgers University, she recently earned a Certificate with Honors in Creative Writing from UCLA-Extension.

In addition to writing, Julie has raised four children (and had her hair raised by them!) and loves to read, hike, camp, shop, knit, eat and participate in blogs and writing contests. She also enjoys visiting schools for workshops, talks and poetry readings.

That just about covers it. Oh! Except for watching movies and traveling. In fact, Julie has lived in many places, including New Jersey, Pennsylvania, New York, Arizona, California, North Carolina, Florida and France.

What Inspired You to Write Your Book?
Oh, boy, this is complicated. I’ve heard an author’s first novel is usually biographical, and, in my case, I think it’s true. Though the story and characters in STELLA BELLAROSA are purely fictional, I do have much in common with the title character. Like Stella I grew up in an Italian-American household and attended Catholic school for 13 years. Also like Stella I lived in New York City for a number of years, where I frequently visited those parts of the city Stella and Pin Pin visit: Little Italy, Chinatown, Greenwich Village and Times Square. I also like to read and think and talk–like Stella–and can see myself getting into the same sorts of situations she does. Although my best friend never stole a wallet, I know what it feels like to make a mistake and feel as though there’s nothing you can do to make it better. I also know there ARE ways to make things better, and the first thing you need to do is forgive yourself and realize… EVERYBODY makes mistakes!