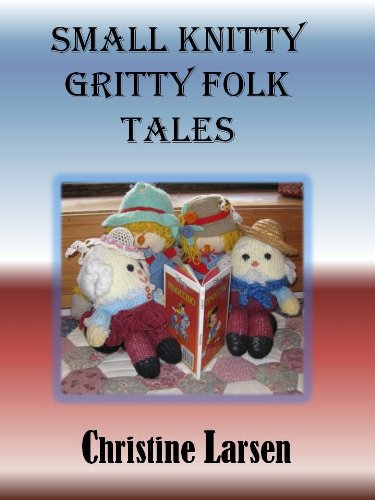 Here are the stories of the Knitty Gritty Kids – mostly ‘Special Needs’ children, rescued from the scrap heap of Life. When I found them some wore sad, tearful expressions, whilst others smiled bravely despite their desperate situation, having been deserted and discarded like so much rubbish, each one begging for rescue. I was putty in their hands. They knew it and relied on an unexplainable magnetism to draw me to them, to be saved from . . . who knows what? I know I didn’t imagine that whispered “P-l-e-a-s-e save me.”

Unloved – after the hundreds of loving stitches that created them. Unwanted and denied basic human and toy rights – after some dedicated knitter breathed life and souls into these wee treasures. It’s a concrete jungle out there. Here are genuine stories of born-again small folk, and their triumph against all odds – tales of the True Grit of the Knitty Gritty Kids.

What Inspired You to Write Your Book?
With beautiful small faces like the ones pictured, it was simple to enter into their world and tell their tales, directly from their tiny aching hearts. The inspiration for their stories was easy – one of the times my words all but wrote themselves. After the rescues, clean-ups and repairs of these pitiful little people, it became a passion for me to encourage parents, both tall and small, to treasure their small material loved ones.

Now here’s another possible ‘born again’ personality. From my first meeting with Simon Scarecrow in a charity shop, I thought – could it possibly be? No. No? Or just maybe . . . The Straw Man from the Wizard of Oz . . . reborn? I don’t know what you think, but I first had serious doubts, and then, as time has marched on, I have truly come to believe in this ‘born again’ theory.

Look at the straw poking out around his hands and feet. Look at the straggly yellow straw hair. And a carrot nose! Well-ll-ll, what can I say? And look at his grin – as if to say,

“Of course it’s me. Why would you doubt it? I’ve walked the Yellow Brick Road, and confronted the Wizard, and now I can do anything I set my mind to.”

In a quiet moment we shared alone, Simon told me that he’s not really fond of standing out in the paddocks – “It’s so cold and lonesome,” he told me. And he went on to tell me about times when birds have actually perched on him, and with the worst table manner, actually pecked at his stuffing. Do you see the Robin on his right arm?

And even bugs crawl on him sometimes, as well. See the Ladybird on his left shoe? Luckily, she was just a sweet little Mother, who rested on Simon for a little to catch her breath before she needed to ‘fly away home’. He’s such a sweet and generous fellow, he just couldn’t say no to her.

But when he’s closer to home and his Mother (me), he finds new levels of courage. Do you know that whilst he was sitting in amongst those big green leaves, a flock of white cockies flew overhead, screeching and squabbling all the way, and not one came down anywhere near where Simon was on guard. And later some crows flew over, and they just kept on going as well. What a man . . . what a scarecrow! Simon is obviously a Scarecocky, as well.

About the Author:
Christine has difficulty in believing she is amongst so many talented, knowledgeable and clever authors. After a long time of feeling overwhelmed by others’ credentials compared to her humble beginnings and life experiences, she felt they were no match for the expertise of authors she read about. But gradually, she realised that she too had tales to tell – stories many others would find entertaining and fascinating – especially because 55 years of Christine’s life have been lived in the last century, as a wife, mother, grandmother and farmer. Earlier attempts to see her words published met with a barrage of rejections, and when these were combined with the demands of her busy lifestyle and responsibilities of family and farm, it all became too overwhelming, and her creative writing was shelved for more than three decades. An opportunity came Christine’s way as the ’empty nest syndrome’ was happening, and suddenly, back out came her trusty pencil, and a series of lenses on Squidoo began, followed by many articles on Ezine Articles. These all proved successful enough to encourage her to revamp and edit, and rewrite and tweak her old ‘stuff’ for kids, plus a whole new batch. This series of children’s books is the result.